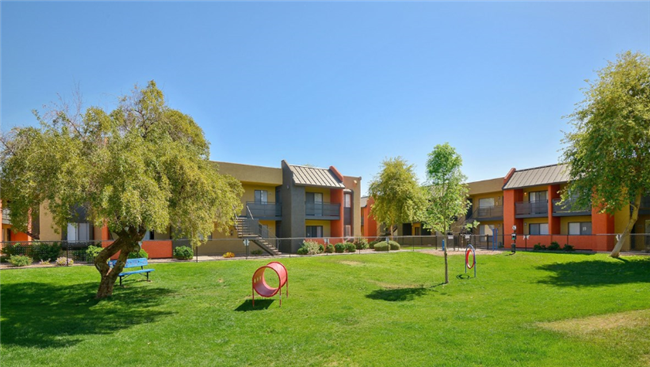 Western Wealth Capital recently acquired a 659-unit Tempe apartment complex, its 54th acquisition in the Phoenix market, and CEO Janet LePage discussed the current environment in a recent interview with Rental Housing Journal because we thought our readers would like to get to know her a little better.

The company is the second-largest Phoenix multifamily property owner, and LePage said, “Our investment there has been consistent. I mean, we took a pause with COVID. Everybody did, just to feel out what’s happening. For years I’ve spoken the same thing, that Phoenix is poised for growth and it’s poised for job growth.

“We’ve always been in the workforce-housing space. The only thing that I’ve seen change with this COVID and everything is, the desirability for multifamily is only going up,” LePage said.

“You look at commercial and you look at retail and if you’re a real estate deployment fund of any kind, and you’ve been buying retail, you’re not buying it probably right now. Or, your strategy certainly changed (to) commercial too. Don’t know how to underwrite. Don’t know what the occupancy levels are going to be. We’re already seeing a shift into even more demand into the industrial and multifamily spaces.”

LePage said the other thing she is seeing is that in New York, California and some other states, collections have not been as strong.

“For more certainty, you’re seeing a shift in that demand is even more so coming into places like Phoenix. I’ve seen that in the open-market bidding, for sure. I think between the job market and affordability, Phoenix has performed incredibly well with respect to collections.

“The only worry I have is whether or not I’m going to be able to afford to keep buying there because people with a lot cheaper equity are coming in to compete. That’s what we’re seeing,” LePage said.

How Did You Get Started In The Business?

“I actually bought my first two investment homes in Phoenix during what I thought was a great market in 2008. The dollar was at par,” she said. Living in Vancouver, Canada, at the time, you couldn’t find “cash flow. The concept of cash flow didn’t exist.”

In 2008, even in the recession, “the fundamentals of Phoenix even at that time were strong,” she said. “We didn’t realize how much more of a recession was going to come to be.

“Those didn’t end up being the two best investments that I made. But I was spending a lot of time down there. I started flipping auction homes and I did that for two years while I worked full-time. Then I bought my first apartment building in Phoenix. “How much can you own up here in Canada?” she asks.

She said Phoenix has always been her favorite city in which to invest, and in early 2014, she left her corporate position and went forward just buying Phoenix multifamily properties. The company expanded outside Phoenix in late-2016 and early-2017. It now owns 78 multifamily properties; in addition to Phoenix, they are located in Houston, Dallas, Atlanta, and San Antonio.

Launch of the property management business

LePage said that up until a recently, the company only used third-party property management.

But in May, they launched Western Wealth Communities, their own property-management company, and now a third of their portfolio is managed by that company. Western Wealth Capital still uses third-party management for the other properties.

LePage said that such things as the concept of virtual tours, contactless leases and paying by text became necessities because of the pandemic. She said the evolution was a priority because of limitations of some of the property-management companies they worked with.

“We’re able to remake it with today’s technology from top to bottom. I have seen huge value in the capabilities presented to us” due to the pandemic.

“Quite frankly, it should have changed a long time ago. The idea that you have to meet somebody during banking hours, Monday to Friday” to then tour a place to rent and print out paper to sign, “it’s not how the world works. Yet we’re still doing it in general terms in the property-management industry,” LePage said. “It wasn’t to change everything, but it’s certainly been a really good learning (experience) and we’ve seen great value in those technologies.”

When asked what LePage sees as the biggest challenge today in property management, she noted that the answer is different depending on whether you look at it from the owner’s side and the property-management side.

“As an owner, I would make different decisions than I would from the perspective of a property-management company,” LePage said. “Because both of you are paid differently. Multiple times I’ve crossed the bridge with property-management relationships” with the question, “How do we align this?

“Because you taking a fee (as a property-management company) versus what our NOI (net operating income) is, are two totally different drivers, and neither is wrong, but they actually don’t align. They just don’t, because the real wealth that my company and my investment partners make, isn’t the cash yield in that given year. It’s the value change in the overall property.”

She said having a good relationship with a property-management company certainly helps because “it’s a lean business. It’s a margin business. There’s not a ton of margin in there to make. We didn’t bridge that with the relationships we had. We had tight ones that understood it, but we never solved the complete alignment with it. I think that if property-management companies could get there that would be a huge win, a huge one.”

One thing the pandemic has also made LePage more aware of is property-management employees. She said property management companies must advocate for their employees.

“If a decision was made to close an office, because they thought that was best, was it best for the owner? There’s that trade-off, right?”

Another point she made is to look at the core competencies of relationships, knowing no one company can do it all. Some are better at some pieces, such as sales, but not all the elements of property management.

“Of course a company says it can do it all, but none of us are built that way. As we’re taking over our management, I’m not doing it on certain assets, unless that’s a core competency of ours. We have different diversified reasons for doing it.”

LePage said the hardest thing about property management is that “you have to wear your heart and your sword on the line at the same time.”

As to the property managers having to collect rent during the pandemic: “I mean, they’re heroes in my mind. The employees on site every day, they’re heroes,  because (a)  it’s scary, (b) it’s sad, and (c) they still need to collect rent. It’s this misconception that somehow, just because you’re an apartment building, there’s a ton of money there. It’s not, it’s leveraged by debts and expenses. Like the margin is tiny, but to go out and face that every day, that’s a challenge.

“I have so much respect for everyone who does it. So that’s been a big part of being an owner is recognizing – even though they’re not our employees- they’re still in my eyes, they’re still part of our team and recognizing them and motivating them is important because it’s really hard.”

She said her company tries hard as owners to let property managers know they are appreciated. “We recognize them and we buy lunches and gift cards. I’ve had people say, ‘For 28 years, I’ve never had an owner recognize me or know my name.’

“And I think to myself, that’s the easiest thing I could do to drive value for my company, or my asset, is if they go that bit above and beyond. It’s can be astronomical to the value of my company, like fixing the plumbing problem and caring enough to not call the plumber.”

Janet LePage is the co-founder and CEO of Western Wealth Capital. For the past decade, she has been focused on creating wealth through well-selected real estate investments. She has grown her precise business strategy from more than 50 residential transactions in Arizona to the purchase of multifamily buildings. Under LePage’s leadership, WWC has acquired 70+ multifamily properties, comprising more than 16,000 rental units, with a transactional value of more than $2.3 billion. In 2019, Janet was recognized in Canada’s Top 40 Under 40 for Business and RBC’s 2019 Canadian Female Entrepreneur of the Year.