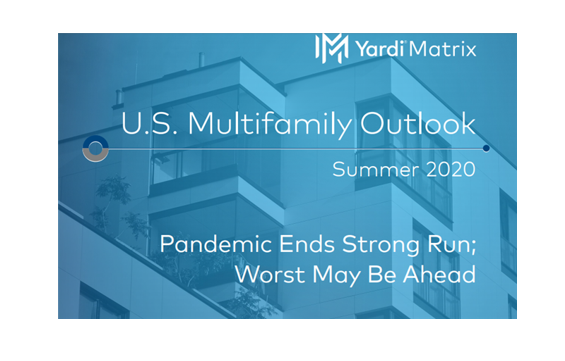 With the pandemic continuing to spread and additional federal funds to help uncertain, the second half of the year could mean pain ahead for rental housing and a challenging time for apartments, Yardi Matrix says in their summer multifamily outlook.

Rents are falling as COVID-19 weighs on the multifamily rental housing industry, and “more pain” is coming, the report says.

While the pandemic ended the long run of multifamily rent growth, expectations of widespread non-payment of rent did not materialize immediately. Federal unemployment and stimulus payments helped tenants make rent payments. The second half of the year, however, is more of an unknown.

“The rent situation is uneven at the metro level. Those that have had the largest decreases in rent growth include large coastal markets such as New York, Los Angeles, San Francisco and Silicon Valley, where rents were extremely high to begin with. Some residents are leaving (temporarily, for now) to avoid crowds and to get more space,” the report says.

“Other markets with rent declines in the second quarter include fast-growing locations such as Austin, Seattle, Miami and Denver. Those markets have had large amounts of deliveries of luxury product in recent years, and thousands of new units are coming online just as demand was diminishing due to the pandemic.

“With millions furloughed and employment less certain, demand is being concentrated in lower-cost apartments, which is showing up clearly in the rent numbers. At the end of the first half, rents of luxury lifestyle units fell 1.8 percent year-over-year, while working-class Renter-by-Necessity units were up 1.4 percent,“ Yardi Matrix says.

“Uncertain is the policy support that has allowed rents to remain fairly level to date. If the federal aid ends while unemployment is still elevated, that would be bad news for apartment rents,” the company says.

How to Manage Tenant Communication During COVID-19