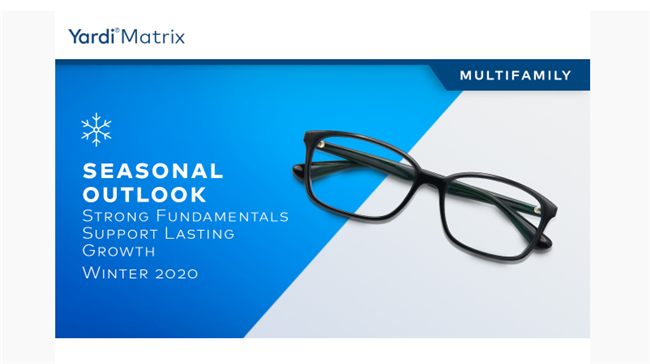 Rent growth in the coming year will average 2.7 percent nationally, according to Yardi Matrix’s multifamily outlook prediction in its Winter Seasonal Outlook for 2020.

“We expect the U.S. multifamily market’s strong performance to continue. Economic growth remains steady, supply absorption is robust in most markets, and millennials and baby boomers are fueling demand,” the report says.

The report says there is still “room to run” in the current cycle in multifamily.

Some highlights of the Yardi Matrix winter multifamily outlook report:

A supply and demand issue

“Despite the current expansion running longer than a decade, homebuilders have not kept up with the demand for housing, especially on the single-family side, and as a result the nation faces a significant housing shortage. With housing production yet to fully recover from the last recession, many metros are facing an undersupply.

“Job openings have outnumbered unemployed job seekers for more than a year and a half, and while the unemployed and the open positions remain both geographically and skill-set divergent, the trend of continued hiring remains.

“Even if employment were to cool and the economy to face a mild recession, we expect the housing market, and multifamily specifically, to ride through the downturn with relatively little impact,” Yardi Matrix says in the report.

Phoenix and Seattle will continue to perform well

“After leading the nation in rent gains for the past 18 months, Phoenix (7.7 percent) and Las Vegas (5.4 percent) are poised to continue their strong runs, bolstered by population growth and economic development.

“Pushing in from nearby California, residents can get more value for their dollar in markets that have consistently diversified their employment pool. Growth in Las Vegas is poised to maintain similar levels in 2020 (5.4 percent) due to continued economic development. Meanwhile, we expect rent growth in Phoenix to temper to 3.7 percent but remain well above the U.S. average.

“Technology-driven markets pulling in coastal talent will continue to perform well above average in 2020, leading rent growth. Seattle (5.8 percent) and Salt Lake City (4.2 percent) still benefit from significant demand, despite having some of the more robust multifamily development pipelines,” Yardi Matrix says in the report. 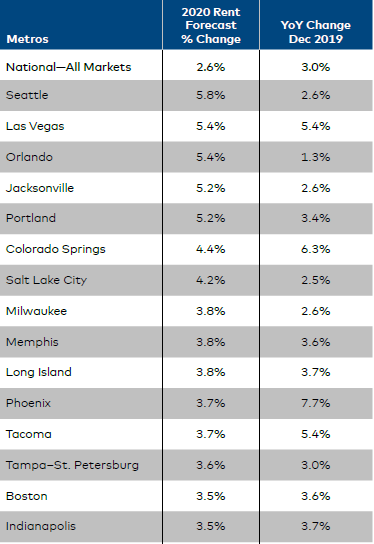 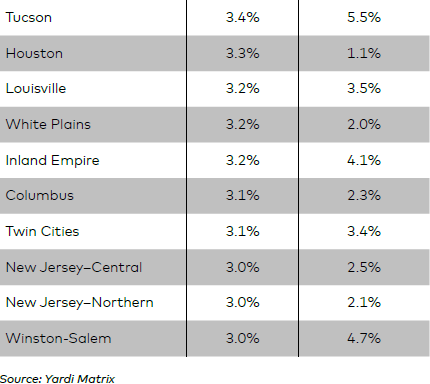 “Overall, the economy continues to walk a fine line of slow economic expansion. From a real-estate perspective, especially for multifamily, the fundamentals of supply, demand and cost of capital remain very well-balanced and indicate continued steady growth for the foreseeable future, barring a major shock to the capital markets and macro economy on par with the global financial crisis,” the report says.