A new market outlook report compiled by Yardi® Matrix concludes that multifamily housing market growth will continue, albeit at a tepid pace, for the next 18 to 24 months, according to a release.

“On a big-picture basis, demand for multifamily shows no signs of slowing,” the U.S. Outlook for Winter 2018  report says, citing the growing 20-to-34-year-old renter cohort, downsizing retirees, a moderate economic growth forecast and anticipated delivery of 360,000 new units in 2018.

The report says that, “after several years of sizzling improvements in fundamentals, 2017 was a year of retrenchment in the multifamily market. Rent growth cooled amid robust development, and occupancy levels—although still solid—began to trend down in some metros.’

The question heading into 2018 is whether the market has passed its peak and is headed for a correction or whether the sector's bull run has more steam left in it?

Our view is that there is some growth left.

On a big-picture basis, demand for multifamily shows no signs of slowing because:

Forecasts call for household growth of roughly one million per year for the next few years, and although housing is recovering, rental demand will be fueled by urbanization and other social trends such as fewer cars on the road

Rent growth decelerated significantly in 2017, and “we expect moderate increases in the 2% range nationally. Growth will be kept in check by the increases in supply, especially in luxury properties, and the lack of affordability in high-cost metros such as New York and the Bay Area,” the report states.

Demand will remain high in the Sunbelt and growing markets in the West and Southwest. 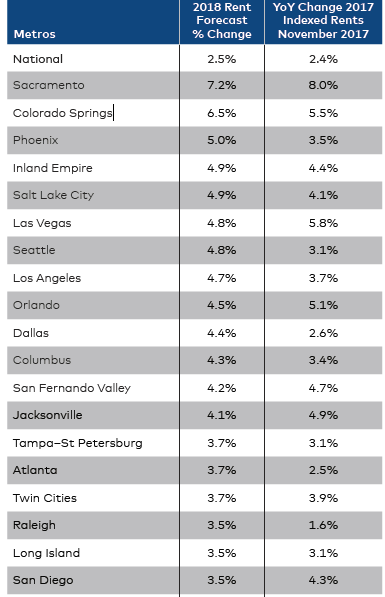 “We expected more deliveries last year, but the shortage of construction workers slowed down the delivery pipeline by lengthening the construction period. The delays do have an upside, giving owners more time to absorb the heavy pipeline,” the report says.

Sacramento is projected to lead metros in rent growth in 2018. We forecast a 7.2% increase due to low inventory growth and demand from a stable and growing job market, as well as the city's proximity to the Bay Area. Other western metros expected to see high rates of growth:

All either relatively affordable markets with growing technology-driven industries or located near major urban centers with significant affordability woes.

Inventory expansion in markets like Portland has caught up to occupancy and rent growth rates, as the increased availability of space is moderating improvement in rents. 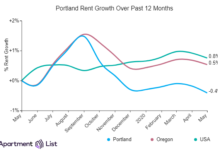