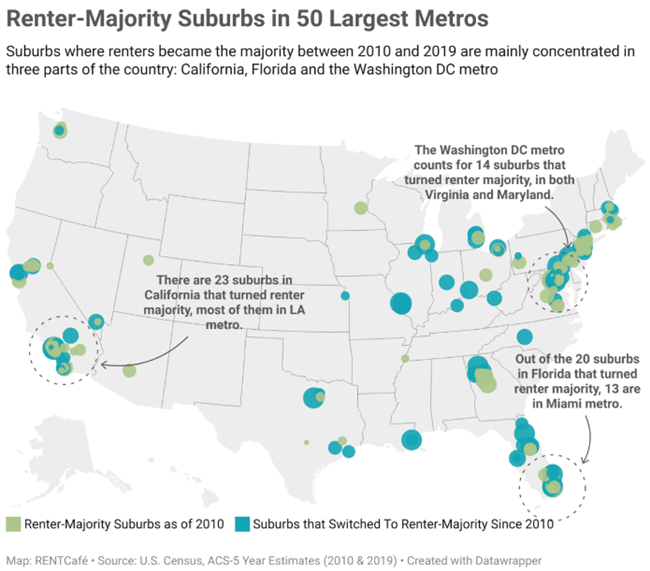 Renters are now “the majority in 103 suburbs that were previously homeowner territory 10 years ago, and 57 other suburbs are expected to follow suit in the next five years,” according to research from RentCafe.

Renters became the majority in many suburbs in the nation’s 50 largest metros, which gained a total of 4.7 million people since 2010 — and of these, 79 percent were renters, according to the latest U.S. Census data.

Nearly 40 of the suburbs that transitioned to renter-majority in the last decade belong to just three metros: Washington, D.C. (14); Miami (13); and Los Angeles (12).

“We have reimagined the American dream for a modern, more diverse society where people are having fewer children and getting married much later in life (if at all), and where most good job/career opportunities require one to be flexible,” said Dr. Kenneth Laundra, associate professor of sociology at Millikin University. He said today’s suburbia is far different from the “Baby Boomer fantasyland” it used to be.

According to Dr. Laundra, many people will take advantage of the flexibility that remote work offers in the post-COVID era — to the benefit of the suburbs closest to urban areas.

“With the increase in remote work, short-term projects and ‘side hustles,’ there’s every reason to believe that the future will be a more transitory, migratory existence. Most of this migration will be toward cities and urban landscapes, where even the suburbs will cluster most closely to urban areas,” he said

The RentCafé report points out that, “During the past decade, the migration toward the suburbs developed fast: The number of suburban areas where renters are the majority grew by a staggering 69 percent. Now, following the switch to renter majority of these 103 suburbs, there are a total of 242 renter-dominated suburbs out of 1,105 suburbs analyzed in our 50 largest metros.”

Since 2010, the rental market has been building up in places previously dominated by homeowners.

Specifically, the largest increases in renter share took place in a number of suburbs in the Midwest and were led by Maple Heights, Ohio, where the share of renters grew by 87 percent. Second was Eastpointe, MI — a bedroom community located within a short drive of Detroit that registered a record 83 percent increase in renter share.

“We estimate that 57 more suburbs will be dominated by renters during the next five years if their share of renters continues to grow at the same rate. Notably, the pandemic has further extended this trend, having triggered an acute need for more living and breathing space — which the suburbs traditionally offer — as more Americans try to make the most of the new work-from-home trend,” the report says.