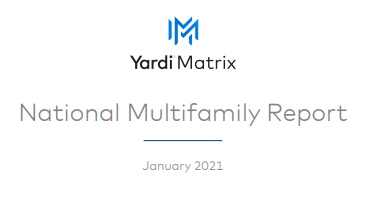 Some bright spots in the housing market and the economy are beginning to emerge, writes Yardi Matrix in its January multifamily report, but cautions there is a long road ahead.

“Nationally, rents remained relatively flat in January, declining by 0.2 percent on a year-over-year basis. On the market level, some gateway markets appear to have hit bottom, while low-cost tertiary and secondary markets continue to see strong rent growth,” the report says.

“The U.S. is continuing the effort to roll out COVID-19 vaccinations nationwide, the number of workers that filed for unemployment declined for the week ending Jan. 23, and consumer spending held up well in December,” the report says.

The multifamily report points out there may be more government stimulus on the way, though the size of the package is still to be determined.

However, “the big question for many gateway markets remains how permanent out-migration trends will be. Some industry sources are speculating that only about half of the moves out of the gateway markets that occurred during the pandemic are permanent,” the report says. The smaller housing markets continue to provide lower cost rents compared to their denser nearby urban cities.

Of the top 30 housing markets, more than half (16 out of 30) “are still experiencing declines in year-over-year rents. While there are some promising signs in San Jose and Washington, D.C., among other markets, many metros still have a long road ahead.”
About Yardi Matrix: