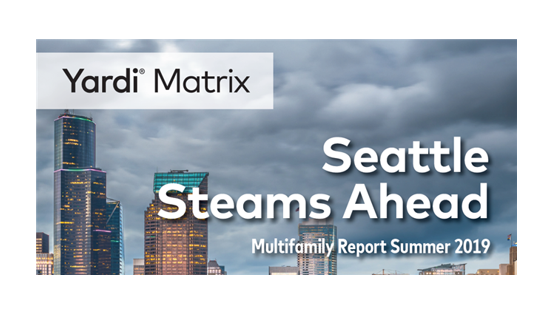 Seattle’s multifamily market continues to show strong fundamentals, exceeding national averages for most indicators, according to the summer report from Yardi Matrix.

Along with a healthy economy and robust population growth, the metro is recording impressive investment activity and steady apartment absorption despite a strong development pipeline, the report says.

“Although developers remain extremely busy, absorption is keeping up and there is little risk of overbuilding,” Yardi Matrix says in the report.

There were more than 21,500 units under construction as of June, with 8,131 expected to come online by December, in addition to the 6,314 apartments delivered in this year’s first two quarters. And although development is slated to hit another cycle peak, we expect the average Seattle rent to advance 3.9 percent in 2019.

The average Seattle rent was up 3.1 percent year-over-year through June, 20 basis points below the national figure. The average rate stood at $1,920, well above the $1,465 U.S. average. At 1.3 percent as of June, Seattle recorded the highest rent hike among all major U.S. metros on a trailing three-month basis, reflecting refreshed strength despite a lingering development boom.

There were 21,523 units under construction across the metro as of June, with more than 8,000 expected to come online by year-end for a new cycle peak. Boosted by the metro’s expansion, developers added almost 50,000 units across nearly 300 projects since the beginning of 2015, three quarters of which are in upscale assets.