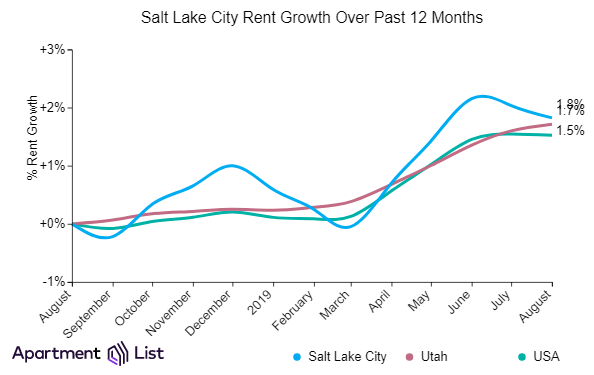 Salt Lake City rents have declined 0.2% over the past month, but have increased slightly by 1.8% in comparison to the same time last year, according to the latest report from Apartment List.

Currently, median rents in Salt Lake City stand at $873 for a one-bedroom apartment and $1,083 for a two-bedroom.

This is the second straight month that the city has seen rent decreases after an increase in June. Salt Lake City’s year-over-year growth leads the state average of 1.7%, as well as the national average of 1.5%. 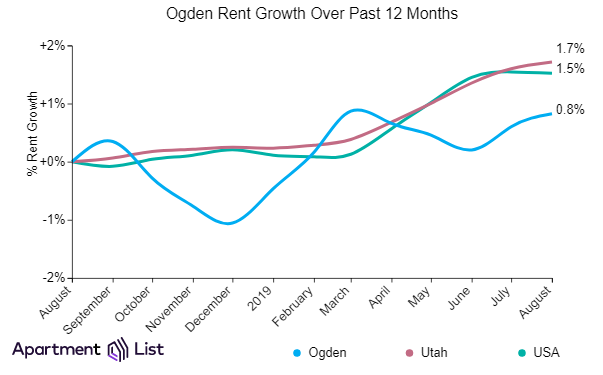 Ogden rents have increased 0.2% over the past month, and are up marginally by 0.8% in comparison to the same time last year.

Currently, median rents in Ogden stand at $697 for a one-bedroom apartment and $893 for a two-bedroom.

This is the second straight month that the city has seen rent increases after a decline in June. Ogden’s year-over-year rent growth lags the state average of 1.7%, as well as the national average of 1.5%.

Salt Lake City Rents Declined Over The Past Month

Apartment List is committed to making rent estimates the best and most accurate available. To do this, they use reliable median rent statistics from the Census Bureau, then extrapolate them forward to the current month using a growth rate calculated from their listing data. They use a same-unit analysis similar to Case-Shiller’s approach, comparing only units that are available across both time periods to provide an accurate picture of rent growth in cities across the country.