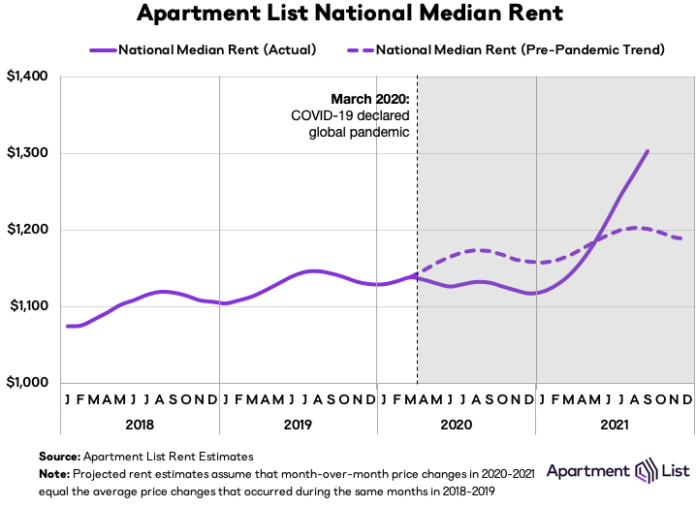 Nationwide rents continued rising from August to September but at a slightly slower pace – as 2.1 percent – than in previous months, according to the latest report from Apartment List.

“Although month-over-month growth has slowed slightly from its July peak, rents are still growing much faster than the pre-pandemic trend,” Apartment List said in the report.

“Since January of this year, the national median rent has increased by a staggering 16.4 percent. To put that in context, rent growth from January to September averaged just 3.4 percent in the pre-pandemic years from 2017-2019,” the report says.

This is the time of year when rents typically begin declining due to seasonality, but that has not yet showed up in so far in reports as rents continue rising. So no signs yet of a seasonal dip in rents.

“As we’ve explored in detail, much of this year’s boom in rent prices can be attributed to a tight market in which more and more households are competing for fewer and fewer vacant units. Our vacancy index spiked from 6.2 percent to 7.1 percent last April, as many Americans moved in with family or friends amid the uncertainty and economic disruption of the pandemic’s onset.

“Since then, however, vacancies have been steadily declining. For the past several months, our vacancy index has been hovering just below 4 percent, significantly lower than the 6 percent rate that was typical pre-pandemic,” the report says. 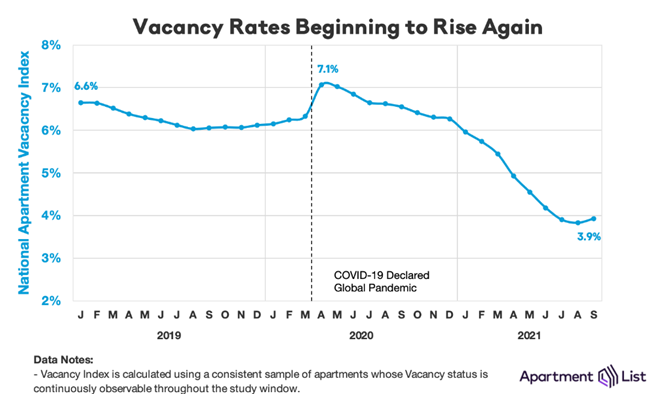 As prices rebound rapidly even in the cities that saw the sharpest declines last year, there are now just five cities remaining where rents have yet to surpass pre-pandemic levels.

That said, certain markets, such as Boise, Idaho and Spokane, Wash., appear to be cooling off.

“While the market remains extremely tight, we’re now seeing the first signals of that pressure beginning to ease,” the report says.