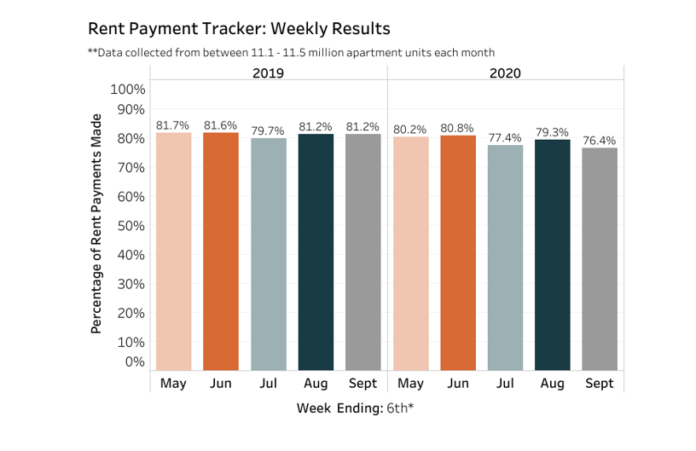 Rent payments are slowing in early September, according to a national rent-tracking service.

“The initial rent payment figures from September have begun to demonstrate the increasing challenges apartment residents are facing,” said NMHC President Doug Bibby in a statement.

“Falling rent payments mean that apartment owners and operators will increasingly have difficulty meeting their mortgages, paying their taxes and utilities, and meeting payroll. The enactment of a nationwide eviction moratorium last week did nothing to help renters or alleviate the financial distress they are facing. Instead, it only is a stopgap measure that puts the entire housing finance system at jeopardy and saddles apartment residents with untenable levels of debt.

“Federal policymakers would have been better advised to continue to provide support as they successfully did through the CARES Act,” Bibby said.

The September payments are an almost 5 percent decrease compared to the same time in August.

These data encompass a wide variety of market-rate rental properties across the United States, which can vary by size, type and average rental price.

“NMHC strongly urges members of Congress and administration leaders to come back to the table and pass meaningful legislation to protect, support and assist America’s tens of millions of apartment residents,” Bibby said.

“It is worth noting that the Labor Day weekend, which occurred a week later than in 2019, may have impacted the collections data for the first week of the month, just as our data showed a comparable dip the first week of July because of the Fourth of July holiday,” said Bibby.  “Next week’s rent-payment tracker numbers will help indicate the degree to which the drop in payments was a result of the holiday weekend or a decreased ability of residents to pay their rent.”

The NMHC Rent Payment Tracker metric provides insight into changes in resident rent-payment behavior over the course of each month, and, as the dataset ages, between months. While the tracker is intended to serve as an indicator of resident financial challenges, it is also intended to track the recovery as well, including the effectiveness of government stimulus and subsidies.

However, noteworthy technical issues may make historical comparisons imprecise. For example, factors such as varying days of the week on which data are collected; individual companies’ differing payment collection policies; shelter-in-place orders’ effects on residents’ ability to deliver payments in person or by mail; the closure of leasing offices, which may delay operators’ payment processing; and other factors can affect how and when rent data is processed and recorded.