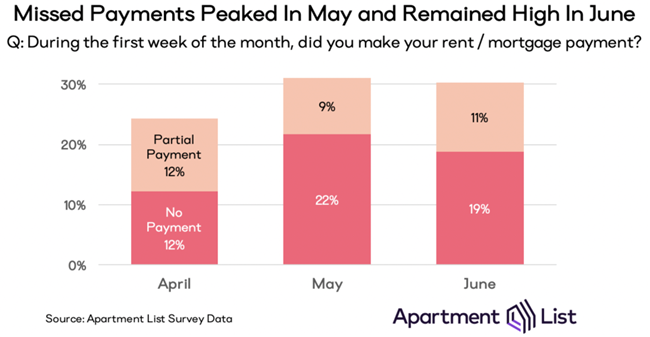 At the beginning of June, 30 percent of Americans missed  housing payments, down slightly from 31 percent in May but still up from 24 percent in April, according to the latest report from Apartment List.

The missed-payment rate—the percentage of renters and mortgaged homeowners failing to make a full payment at the beginning of the month—jumped to 24 percent in April, rose again to 31 percent in May, and then dipped slightly to 30 percent in June.

Of those who have yet to make their June housing payment, one-third made a partial payment and two-thirds made no payment at all.

Some highlights of the missed housing payments report

Housing payments often catch up by end of the month

“Despite many households missing payments at the beginning of each month, the majority have managed to close the gap with late payments over the following weeks,” Apartment List said in the report.

“In April, nearly one quarter did not make a full on-time payment, but fewer than 10 percent remained delinquent by the end of the month. May showed a similar trend: the missed-payment rate dropped from 31 percent at the beginning of the month to 11 percent at the end.”

Some sources, such as the National Multifamily Housing Council, have reported a higher percentage of rent being paid than what Apartment List is reporting.

Rob Warnock, research associate at Apartment List said, “We’ve consistently reported higher missed payment rates than NMHC, and I think it has to do with two things.

“The first is the composition of our samples. By surveying professionally managed multi-family apartment buildings, the NMHC data naturally favors newer market-rate units and a wealthier demographic of residents who can afford them. Our survey, on the other hand, doesn’t have this exclusion. So, I think we’re capturing more inventory on the lower-end of the market, where missed/late payments may be more common.

“This is a minor point, but we ran our survey between June 3-4, while NMHC’s data runs through June 6. That gives their sample an extra two days to make payments, potentially bumping up their rate. Although I can’t say for sure how much of a difference two days make for people struggling to afford their payments in the first place,” Warnock said.