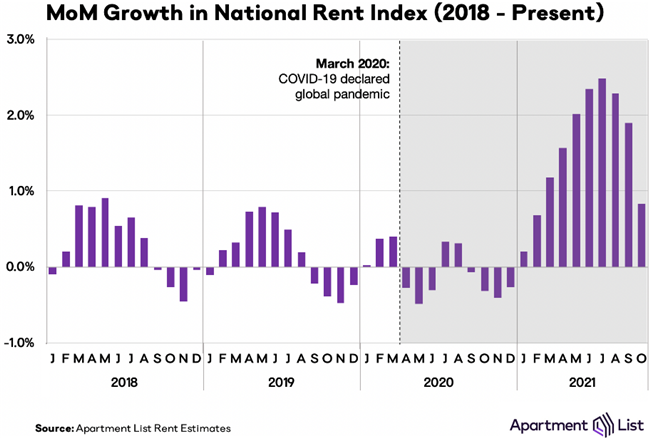 National rent growth continued to slow down in October as the national index increased by 0.8 percent from September to October, the lowest month-over-month growth rate since February, according to the November Apartment List report.

While October still showed a slight rent growth increase, “Twenty-two of the nation’s 100 largest cities saw rents fall this month, ending a six-month stretch in which virtually all of these cities were experiencing uninterrupted rent growth,” Apartment List said in the report.

“Although the pace of rent growth has slowed down significantly from its July peak, growth is still outpacing pre-pandemic trends, with rents continuing to rise during a time of year when seasonality normally causes prices to dip.

“Since January of this year, the national median rent has increased by a staggering 16.4 percent. To put that in context, rent growth from January to October averaged just 3.2 percent in the pre-pandemic years from 2017-2019,” the report says. 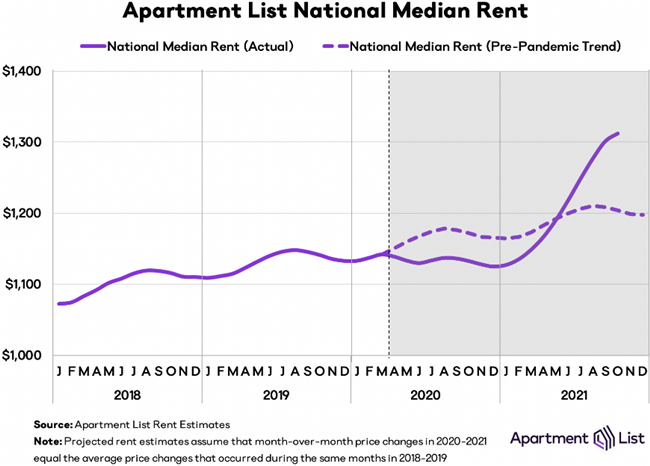 Apartment List says much of the year’s rent-price increases have been tied to the tight rental market, with more people competing for fewer rentals. Now the vacancy rate, after hitting bottom at 3.8 percent in August, has trended up the last two months to 4.1 percent.

“Although this is a fairly modest increase, it represents an important inflection point, signaling that tightness in the rental market is finally beginning to ease. If our vacancy rate continues to increase in the coming months, it’s likely that rent growth will also continue to cool,” Apartment List said in the report by Chris Salviati, Igor Popov, Rob Warnock, and Lilla Szini.

“While the market remains extremely tight, we’re now seeing the first signals of that pressure beginning to ease. That said, it’s important to bear in mind that 35 of the nation’s 100 largest cities have seen rents jump by more than 20 percent since the start of the pandemic. Even if rent growth is finally cooling, this year’s rent boom has already added significant housing affordability pressure for America’s renters.”