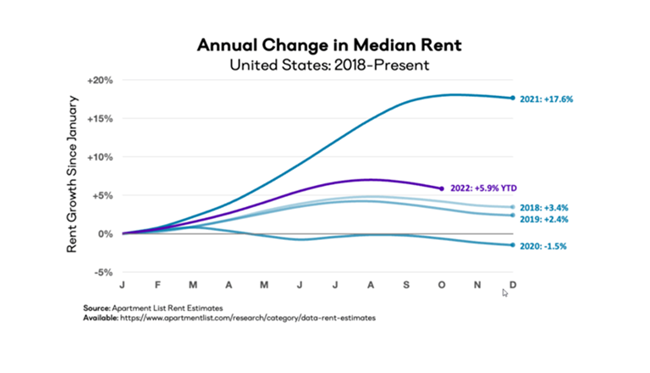 The national median rent fell by 0.7 percent month-over-month in October, according to Apartment List, “the largest monthly decline in the full history of our index, which starts in January 2017.”

“Our national rent index has now declined for two straight months, and is down by 1.1 percent since August.

“October’s record-setting decline marks a rapid cooldown which may signal that we’re entering a new phase of the rental market rollercoaster. It’s likely that rents will decline further in the months ahead, as rental market activity slows during the winter months,” Apartment List says in the report.

Rents decreased this month in 89 of the nation’s 100 largest cities, while an additional two cities saw rents hold steady, and only nine cities saw increases.

And nearly across the board, local rent growth has cooled down since last year – 96 of the top 100 cities have seen slower year-to-date rent growth in 2022 than they did over the same months of 2021, the report says.

The report says some Americans are moving back in with family or roommates, or delaying striking out on their own. This slowing household formation is “driving the cooldown that we are seeing on both the demand and supply sides of the market.”

Growth over the course of the year as a whole continues to pace ahead of pre-pandemic trends, “but we’re now seeing a marked shift in market conditions, with prices cooling and supply constraints continuing to abate. In the winter months ahead, we expect rental activity will continue to slow and we are likely to see continued modest price decreases to close out the year.

18 Months of Outstanding Rent Growth Coming to An End