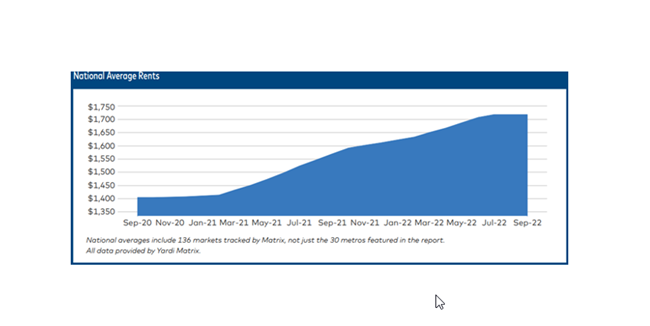 The long run of multifamily rent growth “hit the brakes” in September as the economy continued to cool, Yardi Matrix says in their monthly report.

“After a year-and-a-half of record-setting growth, multifamily rents have hit the brakes. Asking rents have flattened this summer at $1,718 for three months in a row. That comes after rents rose more than 20 percent since January 2021,” Yardi Matrix says in the report.

“The cooling economy is beginning to show its effect on multifamily. However, key fundamentals remain strong,” Yardi Matrix says in the report.

“Rent decreases continue to be concentrated in high-end lifestyle units, which dropped 0.3 percent nationally in September. Rents increased 0.2 percent for renter-by-necessity units and stabilized nationally for all units.

“Despite the flattening rent growth, much about the market remains positive. National asking rents are still at record highs, and national occupancy rates have been hanging around 96 percent since June of 2021.”

Multifamily Rent-to-Income Ratios as of August 2022

“The outlook for multifamily remains strong, although the market may be coming to an end of its extraordinary run of rent growth. Demand is slowing as migration and household formation drop to normal levels,” Yardi Matrix says.

Get the full report here.
About Yardi Matrix