Prices are rising the fastest for two-bedroom and three-bedroom apartments, according to a new rent report, and tenants should expect to see higher prices this summer than last.

Rent among two and three-bedroom homes is appreciating slightly faster than one-bedroom homes in U.S. metros with more new apartment construction, according to a release from the Zillow affiliate HotPads® Rent Reporti.

As rent continues to rise, it’s becoming more difficult for renters to keep up with costs. With rent among two and three-bedroom rentals rising the fastest, renters who need more space face an even tighter affordability crunch.

“Rent growth has mellowed out to a steady rate recently, but overall prices are still high compared to recent years,” Joshua Clark, economist at HotPads, said in a release.

“Two and three-bedroom rentals are seeing the fastest pace of price growth this year, usurping one-bedrooms as the fastest-appreciating segment of the rental market in April 2018. New apartment construction tends to focus on studios and one-bedrooms, so the additional supply of smaller units has eased price pressures in that market segment.

“Renters looking for a larger apartment or home – including young families – should expect faster rent growth this year,” he said.

Though two and three-bedroom rents are appreciating quickly, the financial incentives for living with a roommate remain strong. Sharing a two-bedroom rental with one person is still about half the cost of renting a solo one-bedroom unit. 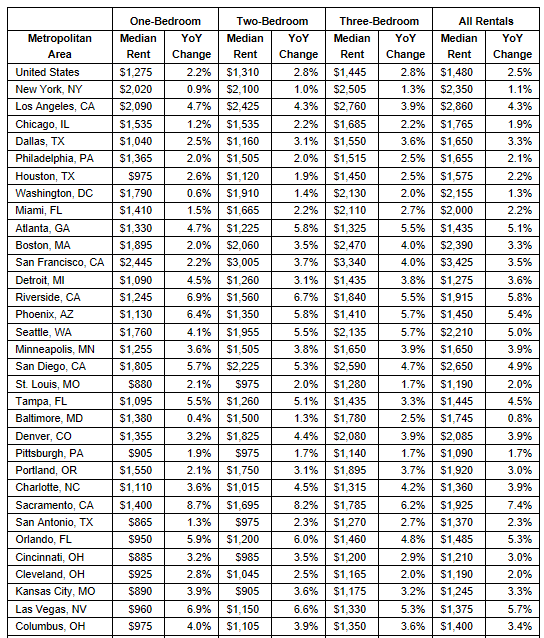