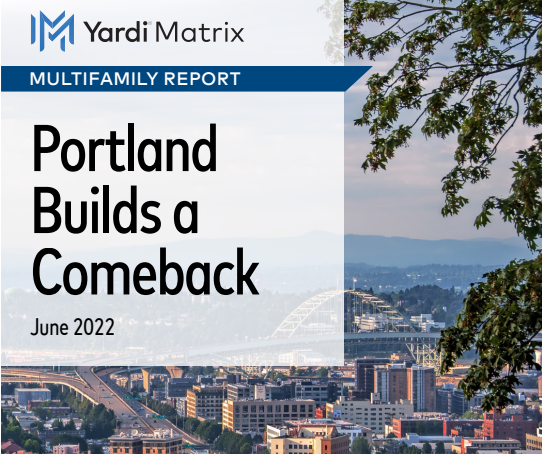 Portland’s multifamily sector is building a comeback as construction activity stays elevated,  rent development is consistent and the employment market is recouping losses, according to the Yardi Matrix June 2020 Portland report.

“Going into summer, Portland rentals are on a sound footing,” Yardi Matrix says in a release, with rents barely trailing the national average. “Improvement is driven by strong demand, keeping both occupancy and development activity high.”

The average rent in Portland was $1,690 per month in April, only $31 above the national average as Portland continues to have a lower cost of living than most West Coast metros such as Seattle and San Francisco.

However, Yardi Matrix warns there could be “some moderation” in Portland multifamily rent growth as inflation and other economic concerns play out.

The occupancy rate in Portland is strong.

“The average occupancy rate in stabilized assets stood at 96 percent as of March, as demand has pushed continued rent development, keeping occupancy elevated over the past 12 months.” The report points out that the “renter by necessity” category was even stronger where occupancy was 96.7 percent. “Upscale assets had a lower figure, but still recorded solid performance, at 95.4 percent as of March.”

No Portland submarkets recorded rent decreases in the 12 months ending in April, with most areas actually seeing growth in the double digits. On a year-over-year basis, rent expansion was highest in:

Employment Growth Continues To Be Solid

Portland added 68,000 jobs in the 12 months ending in February, for a 5.4 percent rate of improvement year over-year.

“The local economy is fighting back after a tough go during the pandemic, but however elevated job gains are now, there’s still work to do to make up for the losses in 2020 and 2021, when decreases were in the double digits.

“On a high note, all employment sectors recorded gains through the interval, with the most severely affected, leisure and hospitality, benefiting from the bulk of improvement: The sector added 31,000 jobs, for a 39.9 percent jump. Improvement in the sector comes as a result of hospitality establishments reopening at full capacity across the metro,” the report says.

“Projects under way, such as the Ritz-Carlton anchored tower developed by BPM Real Estate Group in downtown Portland, indicate that confidence in the resurgence of the sector and the local economy is still reasonably high. Following a slowdown in 2020, sales activity saw a bounce-back in 2021, as more than $2.8 billion in assets traded since the beginning of last year. Development has been high in Portland in the past five years, and the 10,677 units under construction point to further expansion in 2022 and beyond.” Yardi Matrix expect rents to improve 7.6 percent by year-end.