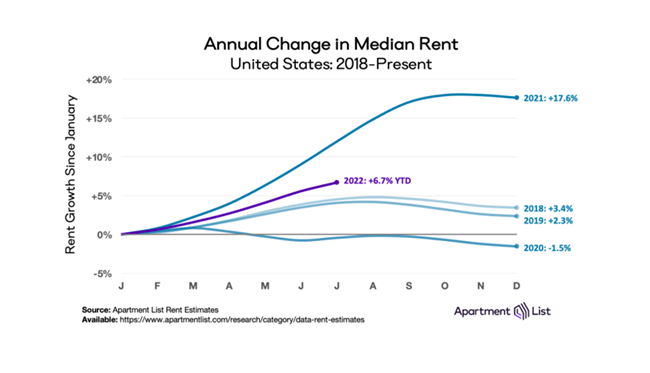 Portland and Seattle beat the national average as nationally rents grew at 1.1 percent in July showing the continued slower rent growth that has been expected, Apartment List says in their August report.

“Over the first seven months of 2022, rents have increased by a total of 6.7 percent, compared to an increase of 12.0 percent over the same months of 2021. Year-over-year rent growth currently stands at 12.3 percent, but has been trending down since the start of the year from a peak of 18 percent,” the report says.

However the report points out that rents are still growing faster than they did in pre-pandemic years. Rents increased in July in 87 of the 100 largest metros.

Portland rents increase sharply over the past month

Currently, median rents in Portland stand at $1,295 for a one-bedroom apartment and $1,512 for a two-bedroom. This is the sixth straight month that the city has seen rent increases after a decline in January. Portland’s year-over-year rent growth lags the state average of 10.7percent, as well as the national average of 12.3 percent. 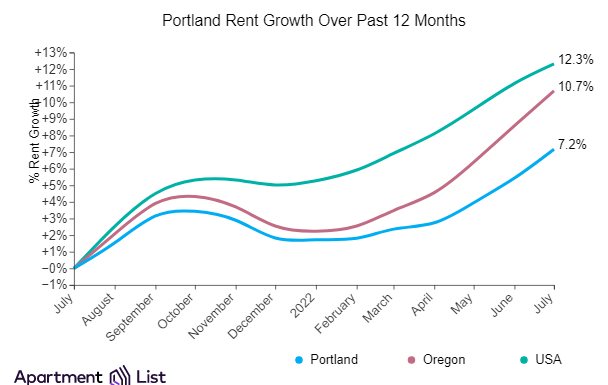 Seattle rents increase sharply over the past month

Seattle rents have increased 2.2 percent over the past month, and have increased sharply by 9.1 percent in comparison to the same time last year. Currently, median rents in Seattle stand at $1,710 for a one-bedroom apartment and $2,066 for a two-bedroom. This is the sixth straight month that the city has seen rent increases after a decline in January. 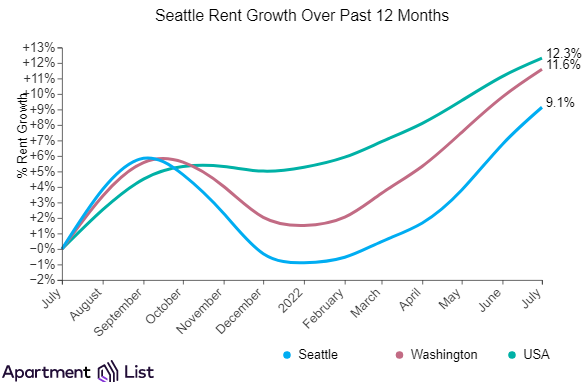 The rapid growth in rent prices over the past year as contributed to the overall inflation the country is facing.

“With inflation top-of-mind for policymakers and everyday Americans alike, our rent index is particularly relevant, since movements in market rents lead movements in average rents paid. As a result, our index can signal what is likely ahead for the housing component of the official inflation estimates produced by the Bureau of Labor Statistics. Thankfully for the country’s renters, our index shows that rent growth in 2022 has cooled from last summer’s peaks.

“This month’s slowing rate of growth is consistent with the timing of seasonal trends that we have observed in the past, and it is likely that growth will cool further in the coming months, as the fall and winter tend to bring a slowdown in rental market activity,” the Apartment List report says. 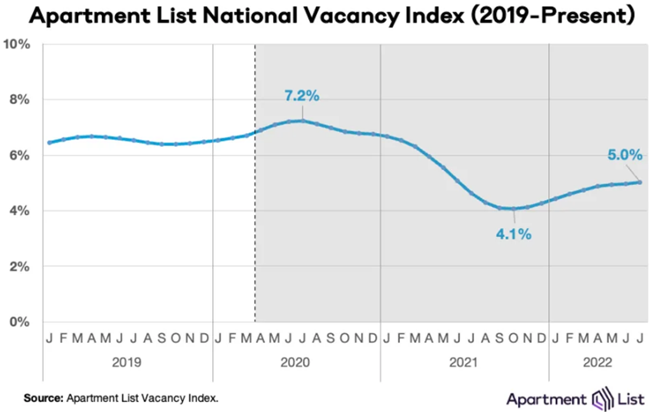 The national vacancy index held steady at 5 percent this month.

“Our vacancy index has been gradually easing from a low of 4.1 percent last fall, but that easing now appears to be leveling off at a rate that remains well below the pre-pandemic norm.

“This may be at least partially attributable to spiking mortgage rates, which can contribute to tightness in the rental market by sidelining potential first-time homebuyers from the for-sale market and keeping these households in rental units for longer.”

The July slowdown in the pace of rent growth “signals that the market is following its typical seasonal trend.

“As we enter the fall and winter months, rental activity tends to slow, and we are likely to see rent growth continue to cool.”

However there is no indication that rental prices will actually decline “in any meaningful way,” the report says.