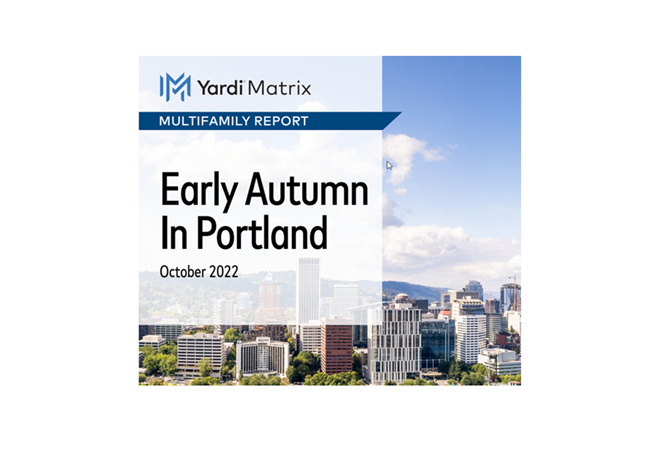 Portland rent growth has moderated and matches much for what is going on with rents across the U.S., Yardi Matrix says in the early autumn report for Portland.

“Rent gains moderated, to 0.6 percent on a trailing three-month basis through August, on par with the national average, but the movement can be attributed to a typical seasonal softening.

“The occupancy rate in stabilized properties declined 30 basis points year-over-year as of July, but at 96.2 percent, it is still a tight rental market,” Yardi Matrix says in the report.

The overall asking rent in the Portland metro rose to $1,759, slightly above the $1,718 U.S. figure. On an annual basis, rates in Portland were up 9.9 percent, 100 basis points behind the national figure.

“Of the 57 submarkets tracked by Yardi Matrix, 26 posted double-digit year-over-year rent growth. In August, six submarkets had an average above the $2,000 mark, up from two a year ago. Lake Oswego (11.3 percent to $2,436) and Pearl District (3 percent to $2,121) remained the most expensive areas.

Yardi Matrix says, “Portland’s economy has made good strides since the peak of the health crisis but has yet to fully rebound to pre-pandemic levels.

“Unemployment stood at 3.6 percent in July, according to preliminary data from the Bureau of Labor Statistics but started climbing again from 3.1 percent in May. Still, its performance is only slightly below the state and the U.S., both at 3.5 percent in July.”

“Manufacturing, and especially semiconductor manufacturing, has been one of Oregon’s main economic drivers during the past decade, with the most recent expansion being that of Intel, in April. The company opened its $3 billion factory in Hillsboro, known as Gordon Moore Park at Ronler Acres, where it hired 2,000 employees in the past year. Intel’s decision to expand into Ohio pushed local leaders to form a task force reviewing the state’s legislation pertaining to the chip industry,” Yardi Matrix writes in the report.

For the first time since 2010, Portland’s population decreased during the second year of the pandemic.

“The construction pipeline remained robust, with 9,967 units underway and another 28,500 in the planning and permitting stages. Of these, 4,314 units broke ground this year, more than double the 2,009 units that started construction during the same interval last year. The pipeline composition changed slightly, with more fully affordable properties underway (26.7 percent of pipeline), but the bulk is still focused on the Lifestyle segment (73.3 percent),” the report says.

Get the full Portland report here.