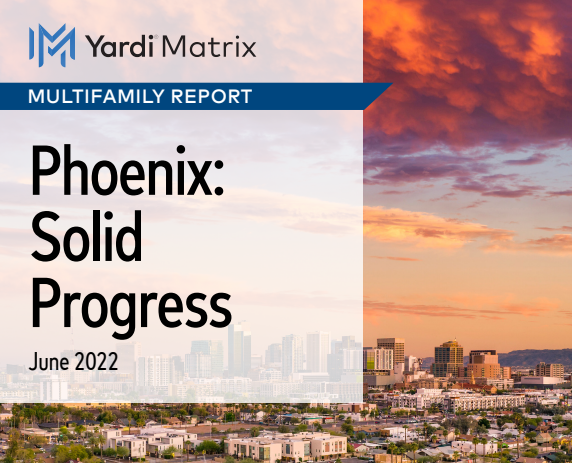 Phoenix had one of the strongest performances in 2021 of any multifamily market in rent growth. However, that growth moderated somewhat in the first quarter of 2022.

“Last year’s robust inventory additions slashed the occupancy rate in stabilized properties by 50 basis points in the 12 months ending in March, to 95.7 percent. This could also be a sign that in-migration is weakening. Renter-by-necessity occupancy decreased by 50 basis points to 95.5 percent, and lifestyle occupancy fell 40 basis points, to 95.9 percent,” Yardi Matrix said in the report.

The picture is still strong, though, with the metro’s $1,645 average rent right behind the $1,659 U.S. rate. “On a year-over-year basis, Phoenix rates rose 20.7 percent, outperforming the national rate by 640 basis points.”

The average asking rate rose above the $2,000 threshold in five submarkets, from none a year ago. Asking rents in five suburbs rose above $2,000. The most expensive were:

The report says Phoenix has emerged as a go-to destination for web scale, cloud and enterprise companies—the metro is the fifth-largest data center market in the United States.

“With operational costs cheaper by one-third than in California, a wave of headquarter relocations surged, and the highly skilled workforce expanded significantly during the pandemic. In addition, Phoenix ranks first nationally in industrial construction volume, thanks to spillover effect from Southern California, where demand is higher than the region’s supply,” the report says.

However the report cautions that “Phoenix also must overcome rising inflation and interest rates, supply chain issues and the coronavirus.”

Phoenix growth in new housing supply has consistently outperformed the U.S. rate since 2018.

“Through April, developers delivered 2,772 units, or 0.8 percent of total stock, 30 basis points above the national rate,” the report says.  “The construction pipeline comprised 38,650 units under way and 64,500 in the planning and permitting stages. Of these, more than 25,500 units are slated for completion in 2022.”

There is caution, however, about the Federal Reserve’s response to inflation, supply-chain issues and rising construction costs causing possible delays in new housing coming on line.

Leading in construction activity were:

The largest project under way is the 761- unit Culdesac Tempe, slated for completion in the final quarter of 2023.

“The largest projects delivered through April were Liv Crossroads in Chandler and Roadrunner in McDowell in Scottsdale-South, each totaling 356 units. The latter was sold prior to completion,” Yardi Matrix says in the report.

Get the full report at Yardimatrix.com.