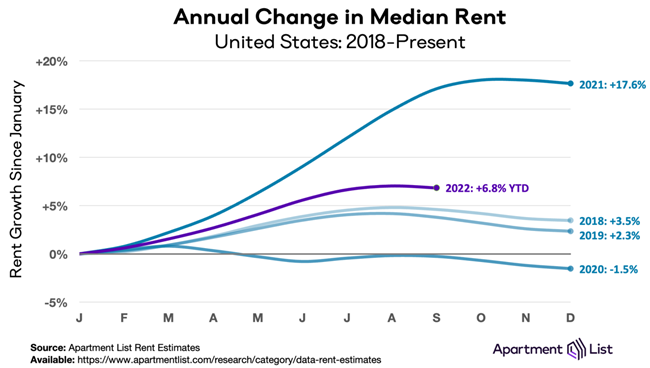 National rents declined by 0.2 percent over the course of September, marking the first time this year that the national median rent has declined month-over-month, according to the September report from Apartment List.

“The timing of this slight dip in rents is consistent with a seasonal trend that was typical in pre-pandemic years. Assuming that trend continues, it is likely that rents will continue falling in the coming months as we enter the winter slow season for the rental market,” the report says.

Normal seasonality at this point in the year

Apartment List points out that the recent rent declines are in line with the normal seasonal trends pre-pandemic.

“But given how atypical the market has been for the past two and a half years, this month’s return to pre-pandemic seasonality represents a notable shift.

“Last September, rents spiked by 1.9 percent month-over-month, as the market continued on an unprecedented stretch of record-setting rent growth which disrupted seasonal trends. In contrast, from 2017 to 2019, rents fell by an average of 0.3 percent in September, right in line with this month’s decline. Assuming that this year’s trajectory continues to follow normal seasonal trends, we can expect to see additional modest declines in the months ahead, as rental market activity slows during the winter months.”

The slowing rent growth is being mirrored by continued easing on the supply side of the market, the report says.

“After bottoming out at 4.1 percent in October 2021, our national vacancy index has been on a trend of gradual easing. This month it rose to 5.3 percent and has shown nearly one full year of continued, albeit slow, improvements,” the report says.

“It’s worth noting, though, that rental vacancies are intertwined with housing availability in the for-sale market, and it’s possible that spiking mortgage rates are dampening the rebound in the rental-vacancy rate. High interest rates can sideline potential first-time homebuyers and keep them in the rental market longer. Two years of sustained rent inflation may also be incentivizing renters to stay put and renew existing leases rather than looking for new ones.”