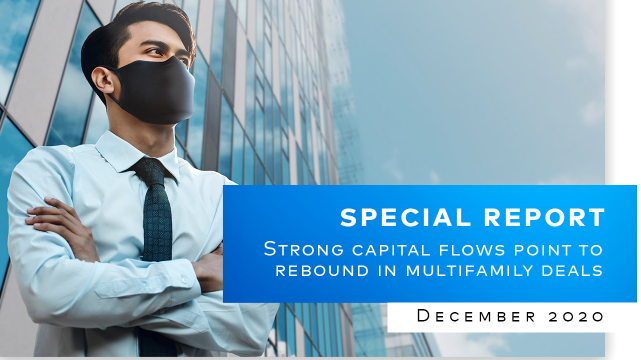 A few summary points from the report:

“Multifamily  transaction activity abruptly hit a wall when shelter-in-place orders started in March. Transaction volume fell to $9.4 billion in the second quarter, the lowest quarterly total since the first quarter of 2011 and a decline of 62 percent from 1Q20 and 67.2 percent year-over-year,” according to Yardi Matrix data.

“But the impact is not being felt evenly across the country. On a regional basis, the Northeast (-54.6 percent) and West (-51.0 percent) had the biggest declines, while the Midwest (-32.6 percent) and Southeast (-34.1 percent) fell the least. Urban and suburban multifamily sales have dropped by roughly the same percentage, but there has been a difference by region.”

The report says the trend of corporations allowing employees to work from home has contributed to the migration from bigger urban areas to more suburban areas and from urban submarkets in the most expensive metros to suburban markets or even secondary markets.

“The upshot is that demand for multifamily properties is high and should remain so for the foreseeable future. Barring a sharp and unexpected economic downturn or a health crisis that would create another shutdown, or disruption in the capital markets, multifamily transaction activity is poised to rebound in 2021 closer to pre-pandemic levels.”

Get the full white paper here.