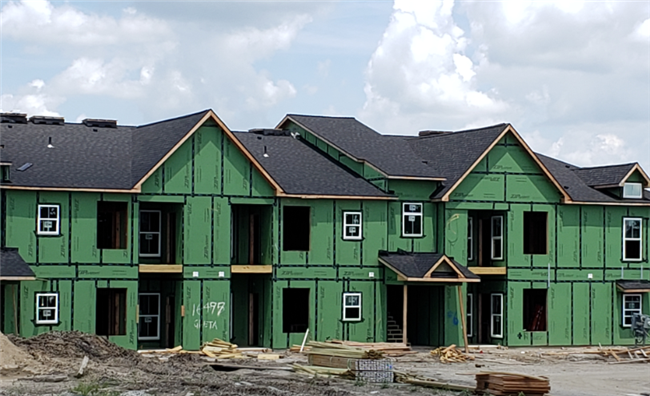 Only a few large cities built enough housing in the past 10 years to keep up with growth in general and job growth in specific, according to a new report from Apartment List and the Census Bureau.

Overall, cities in the Mountain West and the Sun Belt added the most housing the last 10 years, while cities in the Northeast, Midwest and Rust Belt cities such as Cleveland and Detroit failed to add enough.

“According to recently released data from the Census Bureau, the United States added over 9 million net new housing units from 2010 to 2020, expanding the nation’s housing inventory by 6.9 percent. Growth in new housing, however, varies dramatically by region. While some major markets are building enough to keep up with demand, many of the most sought-after metros are severely underbuilding,” the report says.

Job growth and housing not matching up 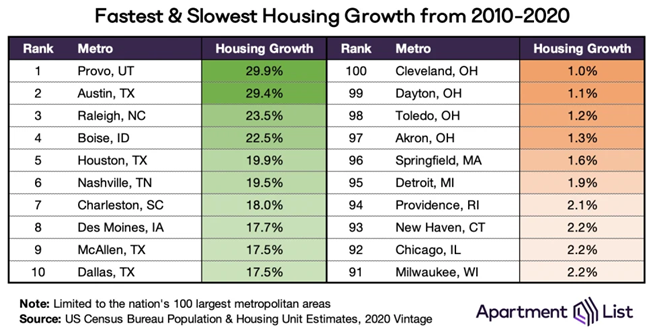 The study says that, using an example of one to two new jobs for every new home, “only four of the nation’s 25 largest metros met that threshold. The imbalance was greatest in Rust Belt cities, likely due to existing vacancies, and expensive coastal cities, which are notoriously supply-constrained.”

Job growth in a market signals the need for new housing and building. Cities with growing economies typically attract new residents who need places to live.

“If the supply of new homes cannot keep up with that influx, the homes that do exist will become prohibitively expensive, especially for lower-wage households,” the report says.

“A market that adds fewer homes may experience an undersupply of housing and a crunch on affordability, something we see playing out in many of the pricey coastal markets that have grown notoriously expensive over the past decade.

“This decade, just four of the 25 largest metros in the nation achieved housing growth in line with job growth.”

The report concludes that over the past 10 years, population grew quickly in the Mountain West and Sun Belt, “where sufficient housing supply met successful job creation. Job-rich coastal markets were in high demand, but their housing growth could not keep pace with jobs, limiting their growth potential.

“The rise of remote work, however, could be a catalyst for change in the housing market. If the link between work and home location is increasingly broken, the lifestyle preferences of remote workers may start to dictate the next shift in housing demand. The early signs already show that the 2020s pandemic recovery will look very different from the 2010s Great Recession recovery, and the changing landscape of American housing will follow suit.”

Pandemic Pricing is Over, As Rents Rise Rapidly In Most Areas