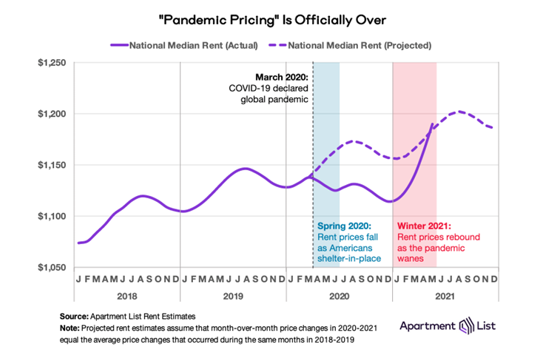 Pandemic pricing is officially over, as rent growth has now been outpacing prior-year averages for several months, according to the latest report from Apartment List.

“The national median rent has now officially surpassed the level where we expect it would have been if the pandemic had never happened,” wrote housing economists Chris Salviati, Igor Popov, and Rob Warnock of Apartment List in the report.

While rents in some key markets are still below pre-pandemic levels, rent prices in these cities, such as Seattle and San Francisco, are rising rapidly.

Up by 2.3 percent in May, the national rent index by Apartment List is showing the largest monthly gain since the company began doing estimates in 2017.

This is the third straight month for record-setting rent increases, the company said.

Prices rebounded in March almost to pre-pandemic levels, and “this month, we hit a new milestone — our national index is now above the level where we project it would have been if the pandemic-related price declines of 2020 had never occurred at all,” the housing economists said in the report.

In many hard-hit cities however, rents are still below pre-pandemic levels. But these cities are now showing strong rent increases.

San Francisco made headlines during the pandemic due to dramatic rent declines, showing as much as 26 percent.

However, the city is now showing a rent rebound. Since January, rents have risen 13.4 percent. While it looks like the pandemic pricing is being left behind in San Francisco, it is still good to remember rents there are 16.8 percent below pre-pandemic levels.

“Beyond San Francisco, we’re seeing a similar trend play out in all of the cities where rents had been falling fastest. Nine of the 10 cities with the sharpest year-over-year rent declines have now experienced positive rent growth for four consecutive months. Four of these cities – San Jose, Washington, D.C., Boston, and Minneapolis – have seen rents increase for five consecutive months, the report says. 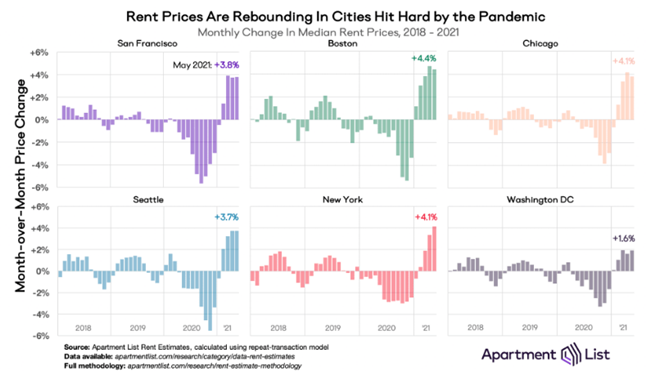 As rents increase rapidly in many markets, there is still a shortage of rental inventory across the country; and it’s still unknown as to how many renters will be moving soon.

“As vaccine-distribution continues to gain momentum, we may be seeing the release of pent-up demand from renters who had been delaying moves due to the pandemic. Whereas last year’s peak moving season was halted by the pandemic, this year’s seasonal spike appears to be making up for lost time,” Apartment List said in the report.