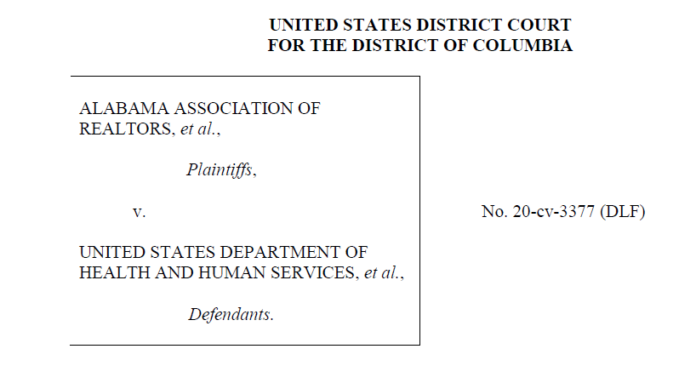 A federal judge has overturned the CDC eviction moratorium saying the agency exceeded its authority in issuing the nationwide eviction ban.

In a 20-page ruling, U.S. District Court Judge Dabney Friedrich, who was appointed by former President Donald Trump, ruled that the agency exceeded its authority with the temporary ban.

However the immediate impact of the decision is not clear. The government has appealed the ruling. It is uncertain whether the appeals court will stay the enforcement of this decision pending conclusion of the appeal. To the extent that decision is stayed pending appeal, compliance with the CDC Eviction Moratorium will still be necessary until the appeal is decided.

The court said in the ruling that the Public Service Act “authorizes the department to combat the spread of disease through a range of measures, but these measures plainly do not encompass the nationwide eviction moratorium set forth in the CDC order.”

The judge wrote in her opinion that she had questions about the constitutionality of the eviction ban and did not see the CDC “had the authority to insert itself into the landlord-tenant relationship without some clear, unequivocal textual evidence of Congress’s intent to do so.”

The judge said courts “expect Congress to speak clearly if it wishes to assign to an agency decisions of vast economic and political significance.”

Luke Wake, an attorney at Pacific Legal Foundation, which represents landlords in a number of related lawsuits, called the ruling a clear signal that the tide has turned against the CDC.

“The challengers have been right all along,” he said. “The government has no authority against any landlord. Full stop.”

The judge said in the ruling, “the court recognizes that the covid-19 pandemic is a serious public health crisis that has presented unprecedented challenges for public health officials and the nation as a whole. The pandemic has triggered difficult policy decisions that have enormous real-world consequences. The nationwide eviction moratorium is one such decision.

“It is the role of the political branches, and not the courts, to assess the merits of policy measures designed to combat the spread of diseases even during a global pandemic. The question for the court is a narrow one: ‘Does the Public Health Service Act grant the CDC the legal authority to impose a nationwide eviction moratorium?’  It does not.”

A number of other judges have ruled on the eviction ban’s lawfulness, with landlords holding a slight advantage in their win-loss record against the federal government.

But while some judges have limited the scope of their rulings to apply only to the parties involved in the particular lawsuits before them, Friedrich rebuffed the federal government’s request that she narrow the effect of her decision, indicating its reach would be nationwide.

The CDC eviction moratorium has been set to expire June 30.

Federal Judge Rules Landlords Do Not Have To Provide Free Housing