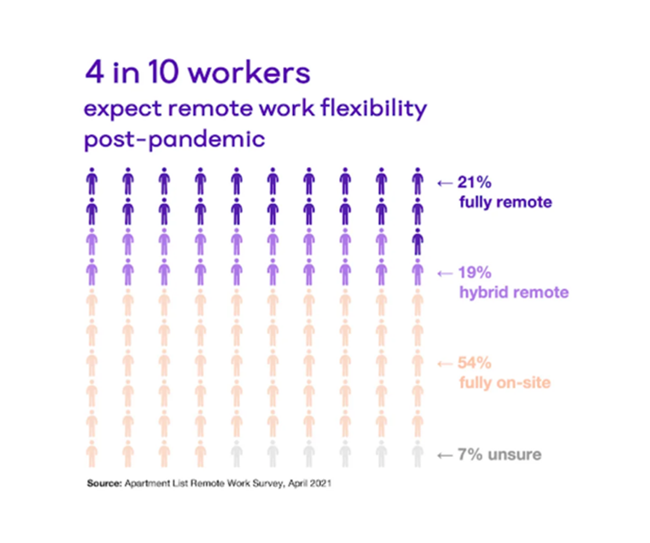 One in four American workers expect that they will continue to have either partial or complete remote-work flexibility after the pandemic, and a majority believe that remote work flexibility will have an impact on their housing preferences and location, according to a report from Apartment List.

“In a survey of 5,000 employed adults across the U.S., we found that four-in-10 workers expect to have some form of continued remote-work flexibility post-pandemic. Nineteen percent expect to have a hybrid arrangement that allows for remote work multiple days per week, while 21 percent expect that they’ll have the ability to work exclusively remotely,” Apartment List said in the report.

Apartment List Housing Economist Chris Salviati said, “I would say that this report provides a lot of valuable new data to confirm trends that we’ve been hypothesizing about for a while. Namely, a broad embrace of remote work will be an ongoing long-term trend that will outlast the pandemic, and this newfound geographic flexibility will have a direct impact on where these remote workers choose to live” and housing after the pandemic. 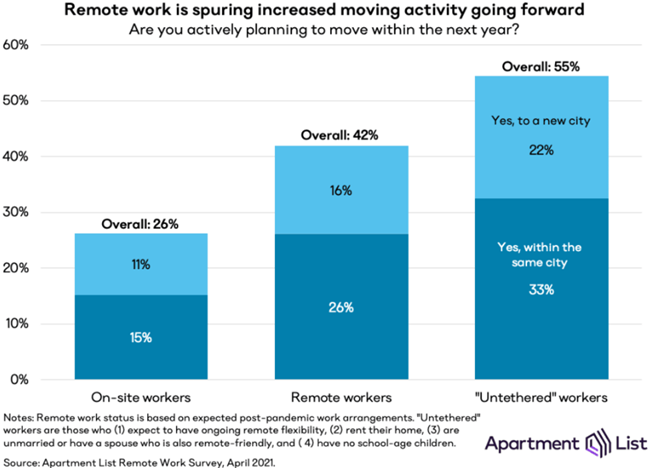 “As for where these folks will go, there are a wide range of preferences among remote workers. Many tell us that they value being close to family, and we observe a fairly even split between those who value urban amenities and those who value natural ones.

“In general, markets that offer a good mix of affordability and access to urban and/or natural amenities are good candidates to see an inflow of remote workers. Cities like Phoenix, Portland, Austin, and Nashville were quite hot even before the pandemic but still maintain an affordability advantage over the most expensive markets, and so likely still stand to gain. We are also likely to see other hubs emerge over time as this trend evolves,” Salviati said. 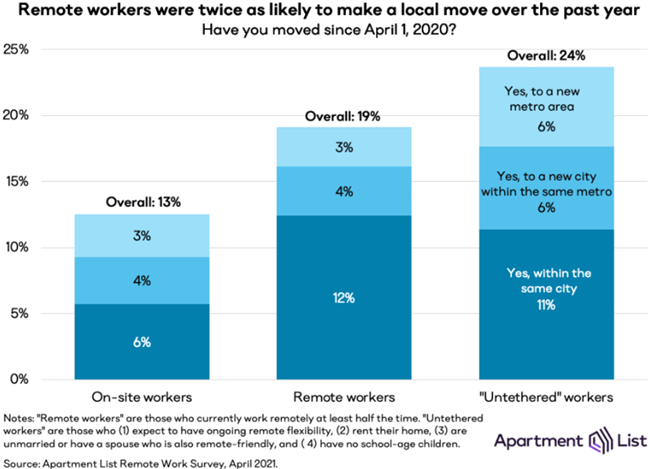 A few highlights from the report on remote work and housing:

The unprecedented change in how workplaces are organized is weakening the link between job choice and housing choice, and remote workers are already taking advantage of this newfound freedom to move at higher rates, Apartment List says in the report.

Understanding the geographic preferences of this group is now more important than ever, as their migration trends will have the potential to disrupt housing markets across the country.

“Our survey sheds new light on the factors that are motivating moves among remote workers and the attributes they value when choosing where to live. We find that the considerations of remote workers differ from those of on-site workers in important ways. These preferences will drive how remote work will impact the housing market over the next several years,” Apartment List says in the report.

5 Trends Shaping the Future of Rental Housing After the Pandemic