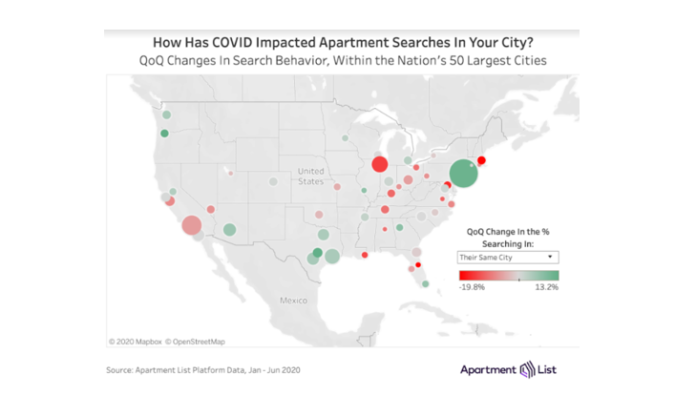 Apartment search data and behavior show subtle regional shifts, but no overwhelming evidence of a large-scale urban exodus, according to behavior on the Apartment List marketplace, the company says.

“While the coronavirus’s short-term impact on the housing market has already started to materialize in the form of softening rents, the long-term implications for the urban landscape are still far from certain and being hotly debated,” the release said.

“We’ve heard a lot of talk recently about an oncoming ‘urban exodus,’ but our data simply isn’t showing any evidence of such a trend at this point,” said Chris Salviati, Housing Economist at Apartment List.

“While there are certainly plenty of anecdotes about folks who have been spurred to make major moves out of the city since the onset of the pandemic, this isn’t something that we see happening at a large enough scale to really move the needle.

“Since the start of the pandemic, we actually see a slightly greater share of suburban renters looking to move into urban areas, rather than the other way around,” Salviati said.

“We do see a slight uptick in the share of renters looking to move someplace new,” the study says, with 78 percent of renters “searching in a different city from where they currently live” in the second quarter, up from 76 percent in the first quarter of 2020.

“Similarly, the share of users searching in a different metro rose slightly from 35 percent to 36 percent, and the share searching out-of-state ticked up from 22 percent to 23 percent.

“But even if renters are a bit more likely to search in new locations, they are not eschewing density,” the apartment search data report says.

“That said, these aggregate statistics mask that in certain markets, we are seeing early signs of a shift away from downtown. In Boston and the Bay Area, for example, search activity is up in the more affordable suburbs. In New York City, however, the opposite is true. If anything, these data show that search patterns in the COVID(-19) era defy broad generalizations.

“In prior research, we have found that to the extent that the pandemic is incentivizing moves, it is doing so primarily among those who have fallen victim to the economic fallout of the crisis and who now need to find more affordable housing.

“In this sense, the pandemic’s impact on migration trends may not be so different from what we’ve seen in prior recessions. We also find evidence that a growing embrace of remote work will play a role, but this represents an acceleration of trends observed prior to the pandemic, and these shifts are likely to play out over years, not months. The long-term implications of this continually evolving situation are still far from clear — we will continue monitoring the data closely and reporting changes as they occur,” the apartment search data report says.