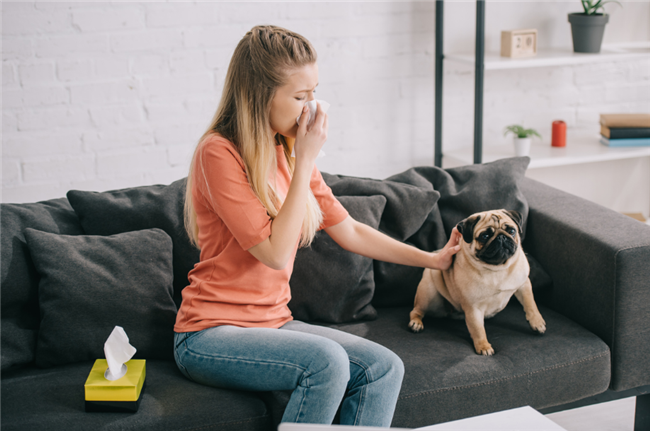 A court has ruled that a landlord caught in a “pickle” must pay a tenant with dog allergies the value of one month’s rent because a nearby apartment was leased to another tenant with an emotional support dog, according to The Gazette, in Cedar Rapids, Iowa.

The apartment building had a no-pet policy, but the landlord made an accommodation required under Fair Housing rules for the tenant with the emotional-support dog.

After years of litigation, In a 4-3 decision, the Iowa Supreme Court overturned a district court ruling that concluded the landlord, 2800-1 LLC, shouldn’t have allowed the tenant to have a dog because of the other tenant’s pet allergies; the lower court then dismissed the case because the law governing accommodations for emotional-support animals wasn’t clear, The Gazette newspaper said.

Iowa Supreme Court Chief Justice Susan Christensen, who wrote for the majority, said the two tenants — Karen Cohen, who had severe allergies, and David Clark, who had the emotional support dog — had the landlord in a “pickle” trying to accommodate both of them.

However, the landlord, who isn’t identified by name in the ruling, should have denied the dog request because Cohen lived there first and the dog posed a direct threat to her health.

Christensen pointed out that this ruling is based on the specific facts of this case.

“Our balancing in this case is not a one-size-fits-all test that will create the same result under different circumstances, such as when the animal at issue is a service animal for a visually disabled person,” Christensen told the newspaper.

The court concluded that Cohen, who suffered allergic attacks, was entitled to her claims of breach of lease and breach of the “covenant of quiet enjoyment.”

The ruling shows Cohen has a “medically documented severe allergy” to pet dander that causes nasal congestion, swollen sinuses and excess coughing. Her allergic reaction is more severe when exposed to cats, requiring her to carry an epinephrine auto-injectable device to protect against anaphylactic shock.

On Jan. 18, 2016, Clark signed a lease to rent an apartment down the hall from Cohen during the same lease period, according to the ruling. Clark’s lease also included the no-pet provision.

On or around Aug. 23, 2016, Clark gave the landlord a letter from his psychiatrist that explained he had an “impairment in his ability to function.” The psychiatrist asked the landlord to allow Clark to have an emotional support dog to benefit his “health and well-being.”

The leasing and property manager notified other tenants in the building to see if anyone had allergies to dogs, according to the ruling. Cohen responded, detailing her allergies to dogs and cats.

The property manager then contacted the Iowa Civil Rights Commission and requested a formal agency determination, even though nobody had filed a complaint, the ruling states. The commission employee said the property manager and landlord should accommodate Clark and Cohen, instead of denying the request for the emotional support dog.

There was no formal finding by the commission regarding this situation, according to the ruling.

The Davis Brown law firm writes on https://www.jdsupra.com/legalnews/conflict-over-emotional-support-animals-36699/  that “The court noted that the first-in-time factor ‘tipped the balance’ in Cohen’s favor.” The court also explained that the first-in-time factor aligned with those of other courts that have rejected requested changes to a residential complex’s contract when those changes interfere with the rights of third parties.

Landlord tried to work things out with emotional support dog

The landlord allowed the dog and assigned Cohen and Clark to use separate stairwells to keep Cohen free from pet dander, according to the ruling. The landlord also bought an air purifier for Cohen’s apartment.

The yearlong efforts were insufficient to prevent Cohen from having allergic reactions to the dog, and she had to limit the time she spent in her apartment. Cohen said she felt as if she had a permanent cold.

Then Cohen filed a small-claims action against the landlord for one month’s rent as damages. After a hearing, the court dismissed Cohen’s case, concluding the landlord made reasonable accommodations of both Clark’s and Cohen’s needs. There was no breach of contract of quiet enjoyment.

Cohen appealed to the district court, which concluded that the landlord made sufficient efforts that would justify denying Clark’s request for the emotional support dog, and dismissed Cohen’s claims because the law was unclear. The Iowa Supreme Court then overturned that decision.

The Brown Davis law firm on JD Supra writes, “While this landlord seemed to try its best navigating the waters of fair-housing law and conflicting tenant interests, such efforts were not sufficient.

“Hindsight is always 20/20, but perhaps this landlord should have continued to work through the interactive process with both tenants to find a goal that was acceptable to both tenants, should have informed Clark of the option of moving to another building, could have tried to obtain a formal opinion ruling from the ICRC (Iowa Civil Rights Commission) on, and/or should have sought legal counsel earlier in the process.”

Conflict over Emotional Support Animals – What are landlords to do?