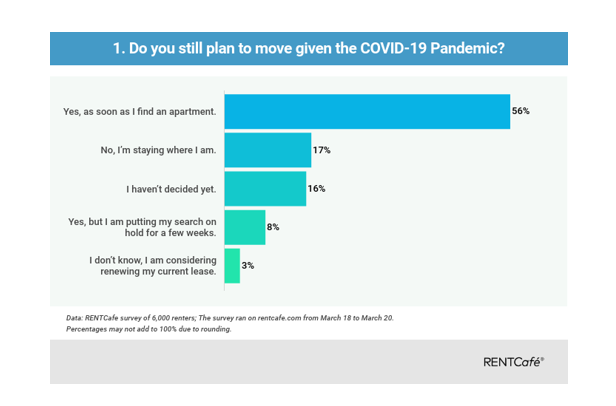 Renters are still optimistic about moving, and finding new apartments remains a priority even during these times, as 56 percent saying they would move as soon as they find one, compared to 17 percent who decided not to move, according to Rent Café.

The survey was conducted of 6,000 people between March 18 and March 20 and asked renters whether they’re still planning to move now, what their main concern is, if and for how long they intend to postpone moving, and how their renting preferences and selection process have changed, if at all.

The survey showed optimism despite rising concerns regarding the spread of COVID-19 and a visible drop in overall apartment search volume just in the past week.

According to the survey results, so far renters seem optimistic about moving now; 45 percent of respondents said they have no particular worries during this time.

On the other hand, 18 percent reported pondering whether it’s safe to move now, and another 18 percent are concerned about their lease expiring and having to move regardless.

And, more than 13 percent are worried about finances and paying rent, while 5 percent are concerned with whether they should renew their current lease. 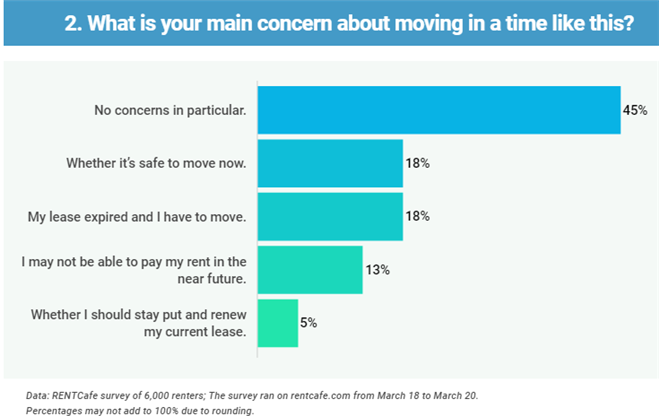 Almost half of the respondents reported no changes in their renting preferences. But 28 percent are now considering something cheaper than what they looked for initially, and 15 percent say they are now paying more attention to how clean a potential new apartment is.

Events and opinions tend to develop fast in times of crisis; we’ll be interested to see how renter perception changes as things move ahead. RENTCafé plans to re-run its survey later this week to capture renter sentiment after stay-at-home orders were put in place in a number of states. We will update this story when those results come in.