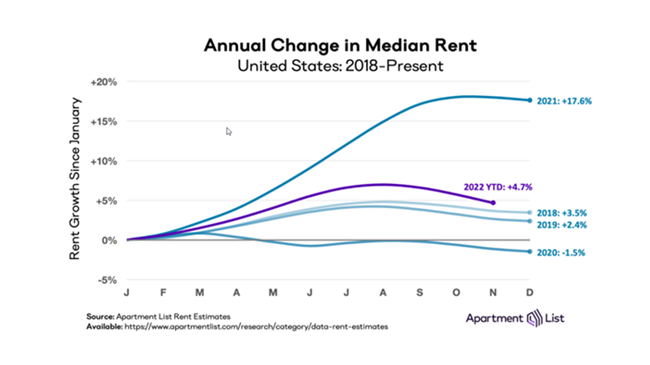 As we close out the year, the Apartment List research team has rounded up a summary of the key rental market trends that defined 2022 and those expected to define 2023.

Here is a look at national trends, regional trends and key themes for 2023 to help make you more informed about 2023.

No. 1 – Rent growth comes back to earth

In the first six months of 2022, rents increased by 5.5 percent nationally, a growth rate that represented a notable slowdown from the 2022.

But in the back half of the year half of this year, rent growth has cooled even further, and apartment prices have now actually been falling since August. It’s typical to see a dip in rents in the fall and winter, when fewer renters are looking to move, but it appears the recent decline is reflecting more than just seasonality.

No. 2 – More options for renters

The vacancy index has been steadily ticking back up, meaning that more supply has been coming available.

In recent months, the rate of supply easing has picked up steam.

For renters looking to move, this means they should now see more options and less competition than at the outset of this year.

During the pandemic, especially in the early months, there was a sharp contraction in the number of households as people moved in with family and friends.

By late 2020, most of these households had re-formed, and that was followed by a surge in new households in 2021, as Gen Z struck out on their own and roommate households broke apart to find their own places. In just a year and a half, the number of households in the U.S. increased by more than 5 million, from a pandemic low of 127.7 million, to a peak of 132.7 million in November 2021.

However, in 2022, new household formation has been relatively flat. As of last month, the total number of households stood at 132.5 million, down by 143,000 compared to last year’s peak. It appears that renters are exhibiting much more caution in striking out on their own, as higher housing costs and general inflation have eroded their budgets, and as fears of a potential 2023 recession loom large in the public’s economic sentiment. 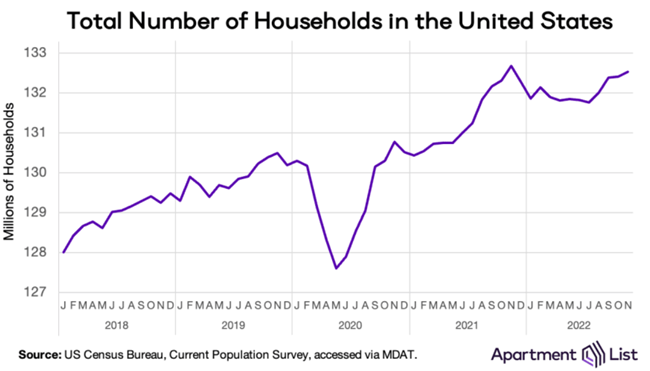 No. 4 – The Sun Belt boom stalls out as the Midwest picks up steam

After the spike in Sun Belt rents, the Midwest may now be the nation’s last bastion of rental affordability, and seems to be drawing interest from price-conscious and geographically flexible renters.

The St. Louis, Indianapolis, Kansas City, and Cincinnati metros all rank among the top 10 for fastest rent growth in 2022. Rent growth in each of the markets has been slower this year than it was last year, but this is largely reflective of the broad cooldown in the national rental market as a whole.

Because of this divergence in rent growth, the price gap between the nation’s most expensive cities and its most affordable ones has narrowed.

No. 6 – The suburban boom continues

Rent growth in the suburbs is outpacing that of the downtown areas.

The further you move from the urban core, the faster the rent growth. With many workers retaining at least hybrid remote flexibility, proximity to job centers has grown relatively less important, and this has driven a shift in preferences that continues to persist.

“Looking ahead to next year, we expect that the most notable trend in the rental market will be a shift in bargaining power away from property owners and back to renters,” the Apartment List economists write in the report.

it’s important to note that “the trajectory of the market next year is largely dependent on broader macroeconomic conditions. If the economy were to experience a recession next year, it’s possible that rents could decline meaningfully (though even then, it’s highly unlikely that we’d see anything close to a return to 2020 rent levels).

“On the other hand, there have been recent signs that inflation is abating while the labor market remains fairly strong. If renter confidence bounces back and demand improves, rent growth could be faster than anticipated.”

In 2023, we’ll also have our eye on the next chapter of the remote work revolution.

Remote work remains prevalent, especially hybrid arrangements. Recent research suggests that 29 percent of workers currently have hybrid working arrangements in which they work from home on some days and go into the office on others, while 13 percent of employees work entirely from home.

If these levels of remote work persist in the long term, it could have significant implications for the housing market.

In a recent survey, 44 percent of workers with full or hybrid remote flexibility told us that they’re planning to move in the upcoming year, compared to just 28 percent of on-site workers.

As office leases expire, many companies may significantly downsize their footprints and redesign their spaces to better suit a hybrid workforce. This would have significant implications for the commercial real estate market, as well as the broader economic outlook for the central business districts of major cities.

However, it’s also possible that in the case of a recession or even just a weakening of the labor market, executives who are skeptical of remote work could leverage increased bargaining power to force workers back to the office full time.

“In any case, by the end of 2023, we should have a clearer picture of the long-term future of remote work and its implications for housing,” the Apartment List report says.

No. 9 – Official estimates of housing inflation will reflect the cooling “that our index has long been showing”

The 2023 prediction “that we have perhaps the highest confidence in is related to the highest profile economic storyline of 2022 – inflation. As we’ve noted throughout this report, our rent estimates have shown that the market has been consistently cooling off throughout the past year.

“We expect that the official measure of housing inflation will turn a corner in the first half of 2023 and begin to gradually fall.

“Thankfully, the topline inflation numbers have already started to cool off, even with the housing component still keeping CPI (Consumer Price Index) propped up. Next year, when the CPI’s housing measure begins to reflect the rapid cooldown in the rental market that we see in our index, it should contribute to further moderation of inflation overall.” The economists write.

“As we close out the year and look ahead to 2023, the rental market is showing some positive signs for renters.

“Rent prices are now dipping after a year and a half of record-setting growth. And with a record number of new apartment units in the construction pipeline, 2023 will bring more options for renters than they’ve had in years.

“As new supply meets cooling demand, renters may finally have the upper hand in the market, while property owners will be the ones competing to fill their vacancies.

“That said, the broader macroeconomic environment remains somewhat uncertain, and that backdrop will be a key factor in determining the trajectory of the rental market in 2023,” the Apartment List economists write.

The Apartment List Research Team is a small but mighty group of economists and analysts dedicated to understanding the rental market as it evolves rapidly. On our blog we publish original research reports and offer robust data products for public use.