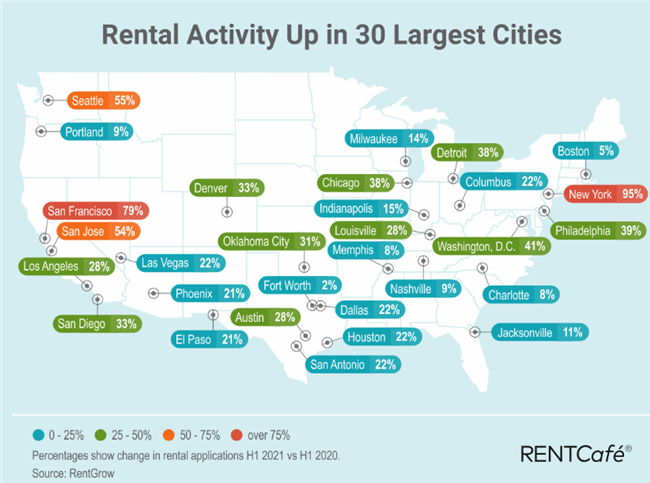 Renters are starting to return to big-city apartments, as high-income earners were most active and among the most likely to switch apartments in 2021, according to a study from RentCafe.

The report says the peak rental season started out twice as strong as usual, with 45 percent more renters applying for apartments in March than in February. By comparison, during the same time period in 2018 and 2019, applications rose by an average of just 23 percent.

RentCafé surveys show the main reason for the move to new rentals was the opportunity to get good deals after the pandemic as well as the need for more space for working from home.

High-income renters most likely to move

Renters earning upwards of $100,000 were the most active this rental season – 34 percent more than last year.

Meanwhile, interest in big-city apartments is surging, and rental applications rose in all of the nation’s 30 largest cities.

“New York City saw the most spectacular comeback, leading the trend, with double its rental activity compared to last year, while San Francisco had the second-highest increase in renters moving in,” the study said.

The study showed that earners in the top two income brackets proved to be the most eager to switch apartments, taking advantage of deals on luxury apartments.  So those most likely to move were renters who earn between $75,000 and $100,000, as well as renters who earn over $100,000. Those were the top groups, which were 30 percent more likely to move this year compared to last. 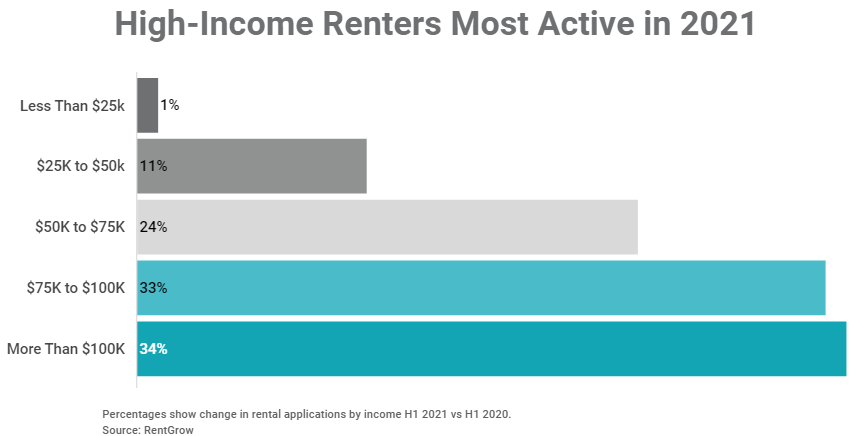 Although last year’s reports “lamented about people ‘fleeing’ the nation’s largest cities, this year’s rental stats put those worries to rest,” RentCafé said in the study.

Renting activity in all of the 30 largest U.S. cities was above that seen during the same rental season period last year and was especially hot in the most popular renter hubs on the coasts.

“New York apartments led this astounding rebound, as the number of renters moving in the Big Apple doubled in the first half of 2021 compared to 2020. Across the country, the Bay Area was in a similar situation, with 79 percent more people applying for rentals in San Francisco. Similarly, apartments in Seattle and San Jose also saw a lot of interest from apartment hunters.”