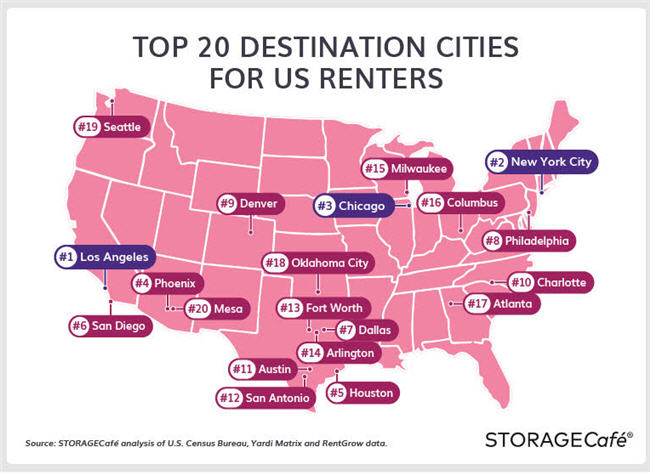 Urban living still appeals to high income earners, and renters living in big cities are less likely to relocate to suburbs, according to a new study from StorageCafe.

Amid a year defined by significant disruptions, the rental market saw an increase in the share of Americans relocating – 18 percent more renters changed residences in 2020 compared to 2019. Out of all the renters moving, 68 percent of people picked urban living over the suburbs

Despite the pandemic and many renters moving for reasons related to COVID-19, the “exodus towards suburban or smaller towns that many anticipated on a grand scale actually materialized for a smaller fraction of the renter cohort,” the study says.

While about 32 percent of renters who wanted to move did choose the suburbs in the last year, that number is close to pre-pandemic renter patterns.

The higher the income, the less likely the renter is to move to a suburban area

Renters thinking of leaving cities with a population of over a million are more inclined to relocate to other urban areas instead of the suburbs.

Only 21 percent of big-city dwellers applied to homes in a suburb in 2020, similar to 2019 trends. However, a bigger proportion of renters moving out of cities with a population between 500,000 and one million – roughly 35 percent  – decided to go suburban.

Income plays a role, as only 25 percent of the renters with incomes between $100,000 and $2 million who planned to relocate in 2020 picked a new rental home in a suburb.

However, 40 percent of the renters with an annual income of under $30,000 who moved last year preferred a suburban area.

The study says younger Americans’ preference for urban living will most likely hold strong in the coming years, as they are generally driven by the promise of professional and social fulfillment traditionally associated with big-city life.

“The big-city lifestyle will represent a momentarily larger share of the metro economy post-pandemic, due to the pent-up unexpressed demand for those services and experiences which have accumulated during the COVID-19 era,” said Larry Rosenthal, Senior Lecturer of Public Policy, Richard & Rhoda Goldman School of Public Policy, University of California, Berkeley, in the study.

“The magnetism of cities – and their irresistible allure socially – will reemerge and thrive. Young post-higher-ed movers will flock in the same or greater numbers. To the extent that job location will transform given the waning appeal of proximity and specificity, one might expect that many transformed addresses will flood the market, making city living more affordable compared to elsewhere,” Rosenthal said.

Impact of working from home versus office

Janice Madden, a professor at the University of Pennsylvania who teaches regional science, sociology, urban studies, and real estate, said in the report that “to the extent that workplaces are in cities and workers commute to them, work leads to greater centralization of residences, both owned and rented.

“I believe that fewer workers will be traveling to their workplaces each day after the pandemic ends because the pandemic has shown us what can be done from home.  People living in cities rather than suburbs to decrease their commutes will be motivated to suburbanize.

“People also live in cities rather than suburbs, however, for lifestyle or consumption reasons.  The pandemic has substantially reduced the lifestyle reason for city living.  Fewer restaurants and arts venues being open make the city less attractive.  I believe, however, that these closures are short-term and that arts and restaurants will be revived after the pandemic.

“So, the effects of living in cities versus suburbs ultimately depend on how strong the workplace pull versus the lifestyle pull is.  Obviously, the workplace effect must decrease the desirability of city living, just not clear whether that effect will be very big,” she said.


Top Suburbs with the Most New Apartments In Last 5 Years