The last 10 years have really been the rental housing decade. Let’s look back at 12 important trends that we’ve seen in the industry, and see what they show us. You may know some of these from your day-to-day work, but others may surprise you.

“We examined a number of economic and demographic indicators to get an overview of the housing trends that shaped the country in the past 10 years,” said RentCafé in the report. “This past decade has transformed the relationship between America and its housing, especially when it comes to renting.”

Average rents in the past decade nationally have increased 36 percent or $390, outpacing median home prices and median income.

Of the cities with complete data for the rental housing decade, Oakland saw the highest rent growth, at 108 percent. National average rent is currently $1,473.

The number of renters in the United States passed 100 million in the last 10 years.

That’s an increase of 9.1 percent, or two times faster than home owners at 4.3 percent. The percentage of those who rent, 34 percent, was the largest since the ’60s.

Twenty U.S .cities made the switch from a homeowner majority to a renter majority.

At the end of the rental housing decade, a third of the 260 largest cities are dominated by renters. Manhattan crowns itself as THE city of renters, with 77 percent of its population living in apartments.

More high-earning Americans are renting than ever.

The number of renter households earning $150,000 a year increased two times faster, 157 percent, than that of high-income owner households at 78 percent.

Renting has increased in popularity among seniors.

The number of households with renters over 60 rose by 32 percent, outpacing younger segments and even homeowners in the same age group.

In a construction boom unseen since the 1980s, 2.4 million rental units were delivered this decade.

A significant 40 percent of these units were classified as luxury.

Texas overshadowed the rest of the United States, with four of the top 20 metros nationwide building the most units this decade. 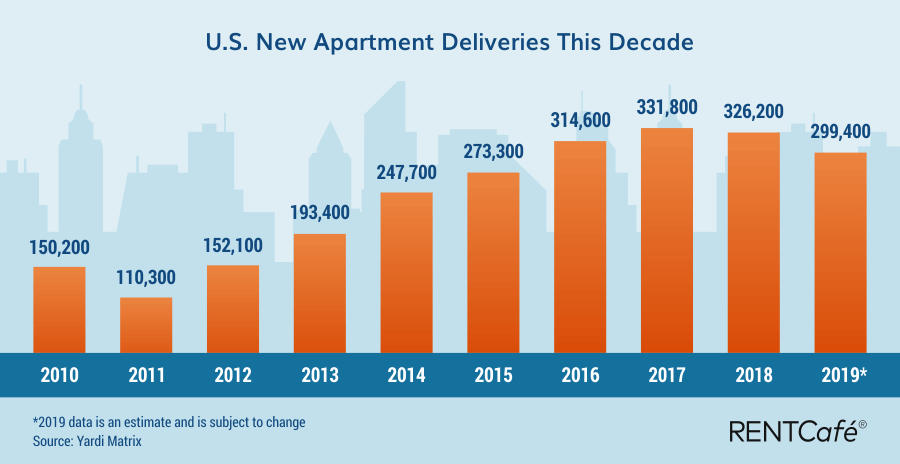 The average size of newly built apartments decreased by 57 square feet (the size of a medium bathroom) in the past decade, from 990 square feet to 933.

Suburbs added renters at a faster pace, 17 percent, compared to cities, at 14 percent.

Top 20 Metros by Increase in the Number of Suburban Renters This Decade:

In 40 of the 50 largest metro areas, suburbs eclipsed urban areas in terms of renter population growth.

Growth in this sector was consistent in the past decade, while single-family rentals witnessed a slowdown as the economy stabilized after the recession.

The nation’s priciest metros, such as New York or Los Angeles, have been shrinking in population as their residents moved to more affordable areas.

See the full report from RentCafé and Yardi Matrix here.