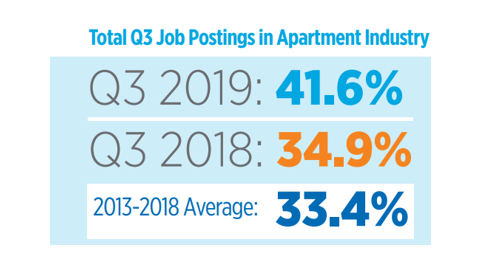 More than 41 percent of available real estate jobs in the U.S. were in the apartment sector, increasing from 34.9 percent in from the third quarter in 2018, according to the NAAEI’s Apartment Jobs Snapshot. 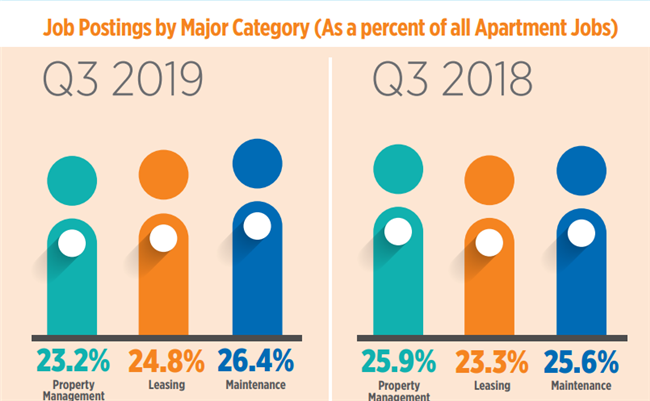 Occupancy up to 96.3 percent

A hectic leasing season yielded 118,000 move-ins during the third quarter.

Also, occupancy soared to 96.3 percent, as reported by RealPage.

Maintenance positions remained in greatest demand during the third quarter, increasing by 0.8 percentage points since the second quarter of 2018. 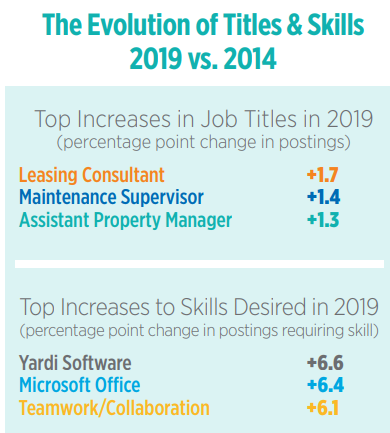 Leasing consultant job postings had the largest growth in demand year-over-year with an increase of 1.5 percentage points.

In fact, leasing consultants had the highest growth in demand over the past five years, increasing by 1.7 percentage points.

Compared to five years ago, there has been an increase in employers seeking candidates who are skilled in Yardi Software, Microsoft Office and teamwork/collaboration.

Consistent with third quarter of 2018, Dallas, Los Angeles, and Washington D.C. had the greatest demand for apartment jobs in 2019. However, Phoenix continues to rank as one of the top preforming apartment markets. According to RealPage, Phoenix led the nation in annual rent growth with an increase of 8.2 percent.

August report from the NAA: