Seattle rents increased 0.2 percent in April, and are up slightly by 1.0% in comparison to the same time last year, according to the latest report from Apartment List.

Currently, median rents in Seattle stand at $1,340 for a one-bedroom apartment and $1,660 for a two-bedroom.

This is the fourth straight month Seattle rents have increased after a decline in December of last year.

Seattle’s year-over-year rent growth lags the state average of 1.7%, as well as the national average of 1.5%.

Throughout the past year, rent increases have been occurring not just in the city of Seattle, but across the entire metro.

Of the largest 10 cities that Apartment List has data for in the Seattle metro, all of them have seen prices rise. 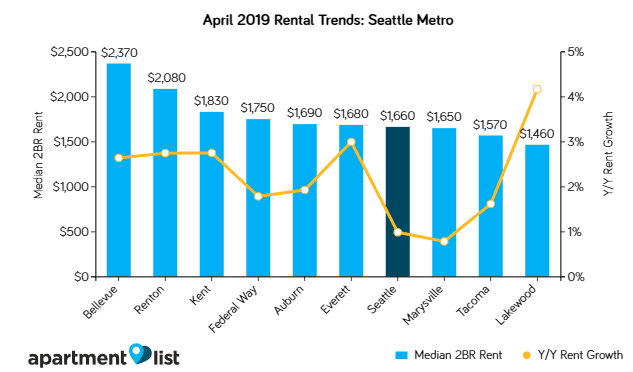 Lakewood rents increased moderately over the past month 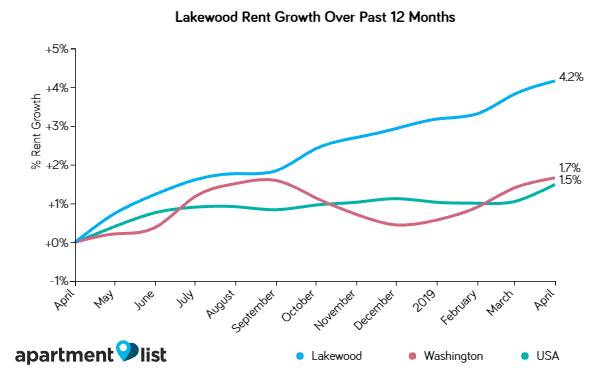 Lakewood rents increased 0.3% over the past month, and have increased significantly by 4.2% in comparison to the same time last year.

Currently, median rents in Lakewood stand at $1,180 for a one-bedroom apartment and $1,460 for a two-bedroom.

The city’s rents have been increasing for 18 straight months; the last time rents declined was in January 2015. Lakewood’s year-over-year rent growth leads the state average of 1.7%, as well as the national average of 1.5%.

Bellevue rents increased significantly over the past month 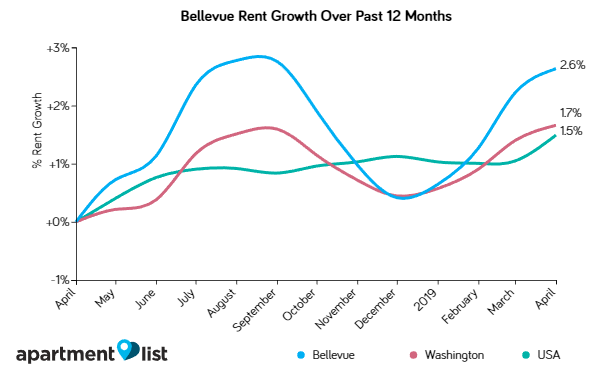 Bellevue rents have increased 0.4% over the past month, and are up moderately by 2.6% in comparison to the same time last year.

Currently, median rents in Bellevue stand at $1,900 for a one-bedroom apartment and $2,370 for a two-bedroom. This is the fourth straight month that the city has seen rent increases after a decline in December of last year.

Bellevue’s year-over-year rent growth leads the state average of 1.7%, as well as the national average of 1.5%. 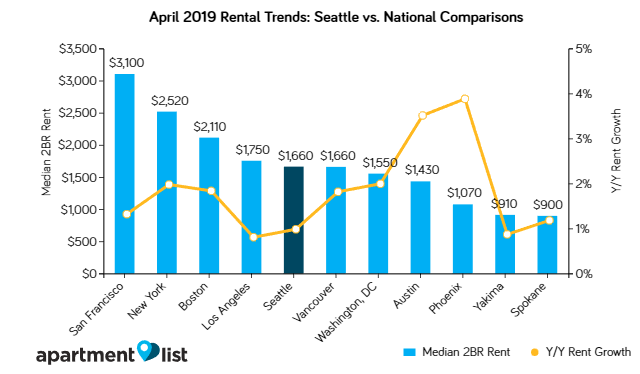 As rents have increased marginally in Seattle, a few other large cities nationwide have also seen rents grow modestly. Compared to most similar cities across the country, Seattle is less affordable for renters.

Data from private listing sites, including Apartment List’s own data, tends to skew towards luxury apartments, introducing sample bias. In order to address these limitations and provide the most accurate rent estimates available, Apartment List  now starts with reliable median rent statistics from the Census Bureau, then extrapolates forward based on its own rental listing data, using a same-unit analysis similar to Case-Shiller’s approach, which compares only units that are available across both time periods to provide an accurate picture of rent growth in cities across the country.