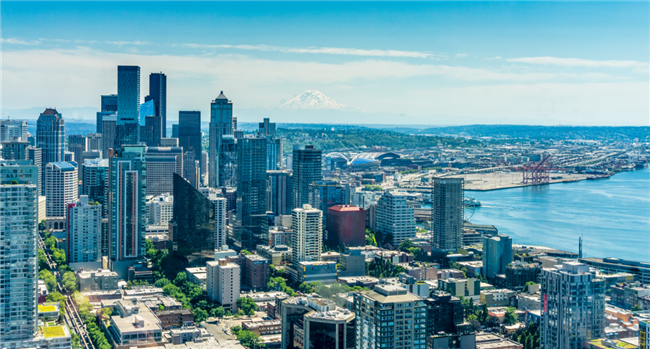 Veteran property manager Cory Brewer weighs in on how the Seattle area market rebound is going and how the pendulum is swinging.

Perhaps the most prevalent 2020 trend in housing was the “migration” of demand. COVID-19 issues, coupled with civil unrest, led prospective renters away from dense in-city multi-family properties to more spacious suburban single-family homes.  When I wrote about this before, I covered these issues in detail (health concerns, telecommuting, etc.).  As we look back on market activity for the first half of 2021, I’ll focus on how the pendulum is swinging back toward downtown Seattle and also take a look at surrounding areas.

By far, the hardest hit local sub-market in our region was downtown Seattle.  Average rents dropped more than 20% in some circumstances, and concessions such as 2-3 free months on a new lease became common.  Market time, or in other words absorption rate, slowed by 35% and the number of condos unsuccessfully offered for lease (listing cancelled or expired without ever finding a tenant) nearly doubled the five-year historical average (statistics gathered from Northwest Multiple Listing Service data).

Now that the numbers are in for the first half of 2021, as the economy has started to re-open and vaccination rates are climbing, we are again seeing demand return to downtown Seattle.  Concession offers have faded away, and rents have begun to tick up (though remain below pre-pandemic levels).  For units listed on the NWMLS, I took a look at the average number of new leases signed per month dating back to 2017.  What a difference!  The monthly frequency of new Seattle condo/multi-family leases signed is up 42.7% over last year, and is by far the highest it’s been over the past five years.

So what is going on in downtown Seattle?  Haven’t people found that they like working from home?  Haven’t they decided to live further outside the city where they don’t have to worry about a daily commute and can enjoy more space for a home office, home classroom, and recreation?  Well, yes, they have.  It’s being reported that the magnet effect of downtown Seattle is attracting younger renters in particular at this time.  It’s not only that amenities, bars, restaurants, shops, stadiums, and artistic venues are re-opening … but these renters also realize that pricing is still relatively depressed, and now is the time to get in before rent levels fully recover.  It probably doesn’t hurt that as a city, Seattle is among the national leaders in vaccination rates, offering a buffer against many of the health concerns that cooled interest in city living last year.  Some of the buzz is returning, and I can attest personally that it was an amazing feeling to recently attend a Mariners game after a year off (even though we lost!).

How is the rest of the Seattle Metro area faring at the 2021 mid-way point?

We are seeing some continuance of 2020 trends, especially with single-family homes on the Eastside.

When people stopped looking for a condo or apartment in Seattle last year, clearly they shifted gears in hopes of finding a rental house, often times on the Eastside.  We saw sharp gains in absorption rate (24%) and not-insignificant gains in pricing (6.5%) across the Eastside single-family submarket.  So far this year, absorption rate has sped up by an additional 12% and pricing is up an additional 9.7%.  Part of the reason for this goes back to the statistic that I referenced earlier, which is number of new leases signed per month.  While we see that the frequency of new leases in downtown Seattle is shattering historical averages in a major way, it is quite the opposite with Eastside single-family homes where opportunities are scarce and competition is fierce.  Availability is down 8% from last year, and down a substantial 34.4% from five years ago.  We are also seeing price appreciation and reduced availability among single-family homes throughout Seattle, Snohomish County, and South King/Pierce County, though not as pronounced as what is happening on the Eastside.  So, if you maintain rental housing in the region, there is strong demand for what you’re offering.

Our resident tech giants (Amazon, Microsoft, Google, etc.) continue to bring in new hires from around the world, and they need places to live.  With very tight sales inventory available, renting is not only the preferred option for many relocating to the region but it’s often the only available option, and even then it can be competitive.

While it has been a hot seller’s market, some of this supply loss can be attributed to legal policies that have come down over the last several years.  It can be difficult to pinpoint exactly why someone sells their rental home as it’s often a combination of factors, but plenty of them are doing so in response to legal changes that they fear are too risky to absorb.  I hear this on a regular basis not only from clients at my own firm, but from other property managers that I network with from around the state.  It’s a real issue – single-family rental housing supply loss, that is – and our elected officials had better wake up to the inevitable long-term effects of their very near-sighted decisions.  My hope is that the real estate exemption for the newly introduced state capital gains tax will encourage investors to remain in the housing sector.  I am also hopeful that as we head into an election season, particularly in Seattle, voters have an appetite for a pendulum swing as it relates to housing policy.

Cory Brewer is the general manager at Windermere Property Management / Lori Gill & Associates. He oversees a team of property managers in the greater Seattle area who manage approximately 1,500 rental properties. Brewer can be reached via www.wpmnorthwest.com or coryb@windermere.com