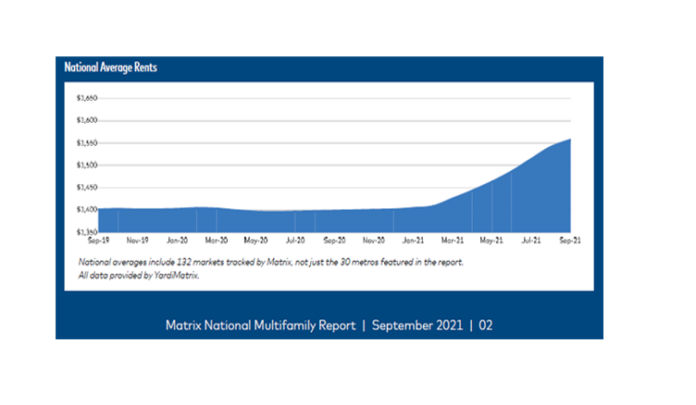 Multifamily asking rents surged again in September as rents rose $16 to an all-time high of $1,558 and are up a record 11.4 percent year-over-year, according to the latest Yardi Matrix  national multifamily report.

However, there was caution in the report about rates continuing to rise at the year-over-year pace.

“We may be seeing the early stages of moderation,” Yardi Matrix said in the report.

“Rents rose $16, or 1.0 percent in September, certainly robust growth by historical standards but the lowest rate of increase in six months. The rent growth is fueled by robust demand combined with the long-term supply shortage, which has produced extremely high occupancy levels.”

Some highlights of the report:

Rent growth in September did not happen in all markets.

Seasonality is “beginning to show up in certain markets, as Seattle, Boston, the Twin Cities and Chicago posted negative month-over-month growth,” the report says. It points out that September has historically been the month when rent growth begins to soften before winter. “However, the one percentage point increase this year represents a significant slowdown in rent gains.”

Before the pandemic, fundamental long-term multifamily concerns focused on affordability, aging millennials and the lack for affordable housing development.

“Looking at the short term, the year-end 2021 forecasts are incredibly high, but they are supported by strong growth. Although growth will slow in 2022, rent gains will remain strong by historical levels.

“The job market will continue to grow, even if the Federal Reserve begins to taper asset purchases and eventually raises interest rates. Barring rapid and drastic monetary tightening, which is highly unlikely, the actions of the Fed will not significantly slow down the multifamily momentum. The multifamily industry is well-positioned and enjoying historically strong performance today.

“However, as we move into a new real estate cycle, the long-term fundamental concerns of affordability and geographic preference for working and living will remain,” the Yardi Matrix multifamily report said.