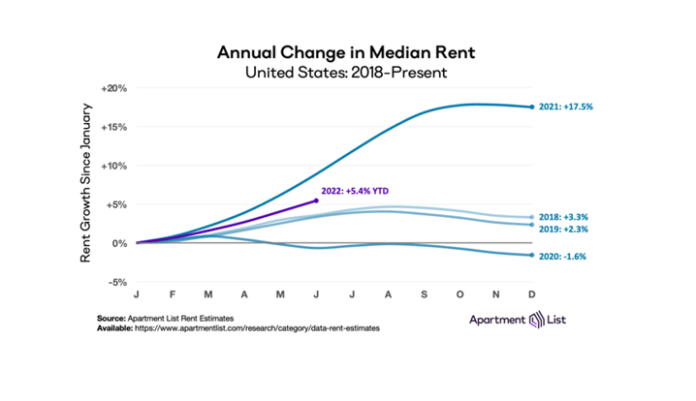 Apartment List says their national index rose by 1.3 percent over the course of June, “consistent with last month’s increase” but so far in 2022 “rents are growing more slowly than they did in 2021, but rents continue climbing faster than they did in the years immediately preceding the pandemic.”

In the June report, Apartment List says over the course of 2021 the median rent increase of 17.5 percent “is a key contributor to overall inflation, which is currently rising at its fastest pace in 40 years.1

“With inflation top-of-mind for policymakers and everyday Americans alike, our rent index is particularly relevant, since movements in market rents lead movements in average rents paid. As a result, these rent dynamics signal what is likely ahead for the housing component of the official inflation estimates produced by the Bureau of Labor Statistics. Thankfully for the country’s renters, our index shows that rent growth in 2022 has cooled from last summer’s peaks. At the same time, however, rents are continuing to rise faster than they did in pre-pandemic years.”

Apartment List reports in the first six months of 2022, their national rent index has increased by 5.4 percent, well below last year’s 8.8 percent increase over the same months.

Vacancy rate easing appears to be leveling off

The vacancy index spiked above 7 percent in the early months of the pandemic in 2020, as many Americans moved in with family or friends amid the uncertainty and economic disruption of the pandemic’s onset. After that, however, vacancies began a steady decline, eventually falling to a low of 4.1 percent.

Since October of last year, however, “our vacancy index has been on a trend of gradual easing. This month however, our index remained flat at 5 percent, after seven consecutive months of increases.

“It’s likely that spiking mortgage rates are beginning to sideline potential first-time homebuyers from the for-sale market, keeping these households in rental units for longer. And although we’re now in the midst of the busy season for the rental market, when the bulk of moving activity normally takes place, rapidly rising rents may be incentivizing many renters to stay put and renew existing leases rather than looking for new ones.

“These factors could be contributing to the flattening of our vacancy index at a level that is still far below the pre-pandemic norm,” the report says. 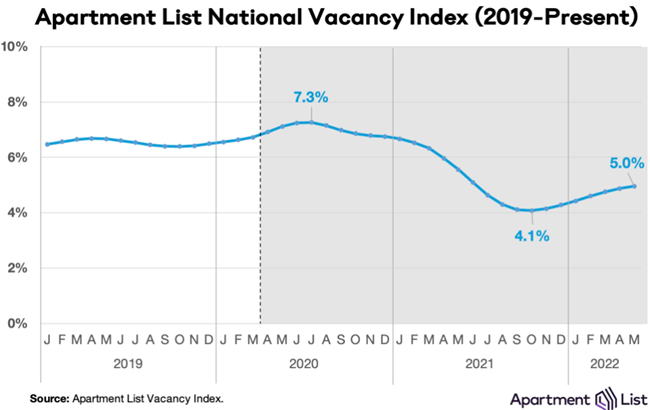 “With a 1.3 percent increase in May, rent growth is continuing to pace ahead of pre-pandemic trends, even as it cools substantially from last summer’s peak. While the apartment market has shown some signs of easing, our 5 percent vacancy index remains well below the pre-pandemic norm, and increased pressure in the for-sale market could translate to the rental market as well.

“The summer months are likely to bring continued rent growth through the rental market’s busy season. Despite a recent cool-down, many American renters are likely to remain burdened throughout 2022 by historically high housing costs,” Apartment List says in the report.