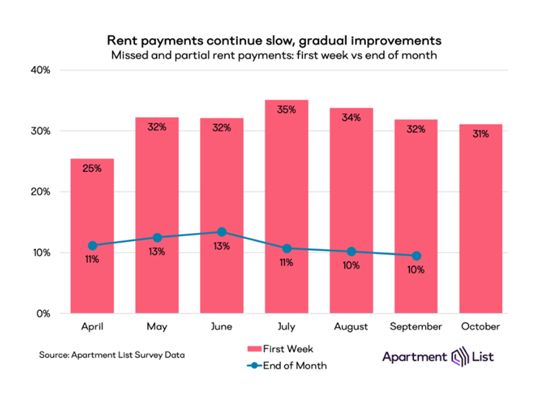 Americans who are not able to make housing payments today are significantly less likely to vote and those who are struggling most are least likely to make their voices heard at the ballot box, according to a new survey from Apartment List.

“In the first week of October, 31 percent of renters failed to make a complete on-time payment of their rent bill,” Apartment List writes in the survey. “This represents the third straight month that we’ve seen improvement in this figure and the best rate of on-time payment since April.

“The changes here have been extremely slow and gradual, but as talks for additional stimulus continue to stall out in Congress, any improvement whatsoever can be taken as a positive signal. That said, this improvement may also be driven by a composition effect if those renters who are struggling most have moved back in with family or friends and are simply no longer appearing in our renter sample.”

Although nearly one in three renters failed to pay their full rent in the first week of the month, “we continue to find that the majority of these missed payments are made up with late payments by the end of the month.”

Key findings from the report include:

As the election rapidly approaches, “we asked this month’s survey respondents about their intent to vote on November 3. The results point to a concerning trend in the way that economic hardship interacts with political participation.

“We find that those who entered October with unpaid housing bills from prior months are significantly less likely to say that they ‘definitely will vote’ in the upcoming election. Among homeowners, 87 percent of those who started the month without any unpaid mortgage bills plan to vote, compared to just 60 percent of those who had unpaid bills.

“We observe a similarly large gap between renters who are fully caught up on their rent payments and those who have outstanding rent debt,” the survey said.

“This gap is not explained by political-party preference. We find that rent debt and missed housing payments are common across the political spectrum, and missed-payment rates were consistent across respondents in counties that Trump won and counties that Clinton won in 2016. Those with no unpaid housing bills report being more likely to vote regardless of whether they report leaning Democrat or Republican.

“In addition to finding that those who are struggling with housing costs are less likely to vote, we also observe a significant gap in expected voter turnout between renters and homeowners, a phenomenon which we’ve explored in detail in the past. Although the gap between renters and homeowners is partially driven by demographics, homeowners are also motivated by a significant financial interest in policies that could affect local property values. 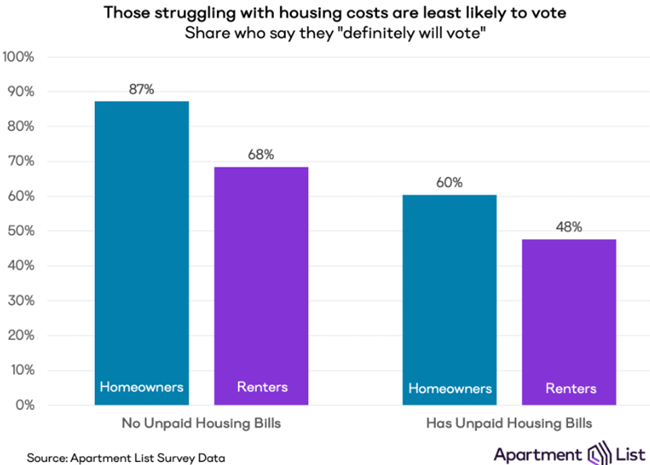 “Among the four groups displayed in the chart (above), renters with unpaid rent bills are by far the least likely to say that they plan to vote. This finding implies that those Americans with the most pressing needs are least likely to have their voices heard in the political process. While we did not explicitly ask why respondents do or do not plan to vote, we have previously found that renters are more likely to be non-citizen immigrants, and therefore ineligible to vote.

“However, prior analysis of census data has also shown that renters have lower turnout than homeowners even when limiting to the voting-eligible population. This is likely at least partly driven by the difficulty of their circumstances. For example, these renters are more likely to work hourly wage jobs, and voting may require taking time off work that impacts their paychecks in a way that salaried workers need not worry about. Furthermore, low-income renters are more likely than homeowners to be members of minority groups that may be subject to voter-suppression tactics.”

“We found that those who are currently bearing the brunt of the economic pain are actually least likely to vote. While partially driven by demographics, this result also reflects the fact that voting often entails an extra burden for many low-income minority renters.” The payment survey is showing “the various ways that societal inequities play out in the housing market,” Apartment List said in the report.