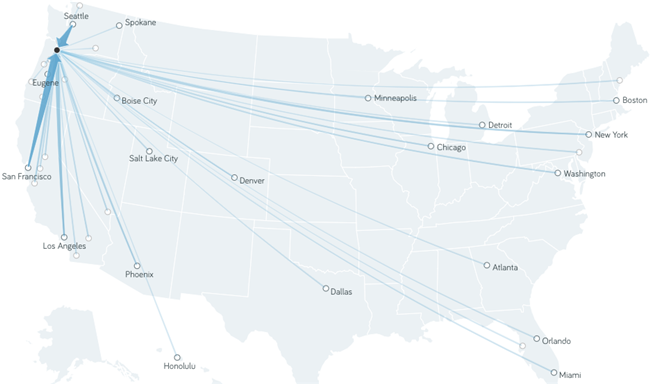 A new report on renter migration patterns shows Portland is seen as an affordable alternative to San Francisco and Seattle according to the report from Apartment List.

“In some cases, the patterns we observe in this data are intuitive, while in others we unearth surprising insights,” Salviati writes in the report. A new interactive mapping tool  from Apartment List uses unique, proprietary data from our user searches to examine where people are looking to make their next home. This data sheds valuable new light on migration patterns that will reshape cities around the country.

Portland is the most popular out-of-state destination for those looking to leave the San Francisco metro.

Among all renters looking to move to Portland from elsewhere, 9.0 percent are currently living in San Francisco, making it the most popular inbound search location for Portland.

Seattle is the 2nd most common source of inbound searches to Portland, followed by Los Angeles, San Jose, and New York.

33% of Portland renters are looking to move elsewhere

According to the new report published by Apartment List, 42.5% of those looking for a place to live in Portland are searching from outside the metro. Renters looking to move to the Portland metro from elsewhere are most likely to be searching from San Francisco, CA (9.0%), Seattle, WA (8.9%), or Los Angeles, CA (4.8%) – areas that boast some of the nation’s fastest growing tech hubs. The City of Roses has a robust tech scene and growing population, as workers in San Francisco and Seattle are constantly seeking out more affordable housing.

In fact, Portland is the most popular out-of-state destination for those looking to leave the San Francisco metro. Among all renters looking to move to Portland from elsewhere, 9% are currently living in San Francisco. West Coast tech workers find Portland to be a more affordable alternative to other neighboring metropolitan areas.

Additionally, Portland is the most popular destination for Seattle renters looking to move elsewhere, with 7.9% of outbound searches being dedicated to it. Some of those looking to move to Portland may be prepared to work remotely for their current employers, as the city has the nation’s fourth-largest share of remote employees.

Renter migration from San Francisco, but not from the Bay Area

San Francisco has the third highest share of users looking to move outside the metro.

At first this may appear to confirm a popular narrative that San Francisco is losing residents to more affordable emerging tech hubs such Denver and Austin, however, a closer look at the data contradicts this interpretation. 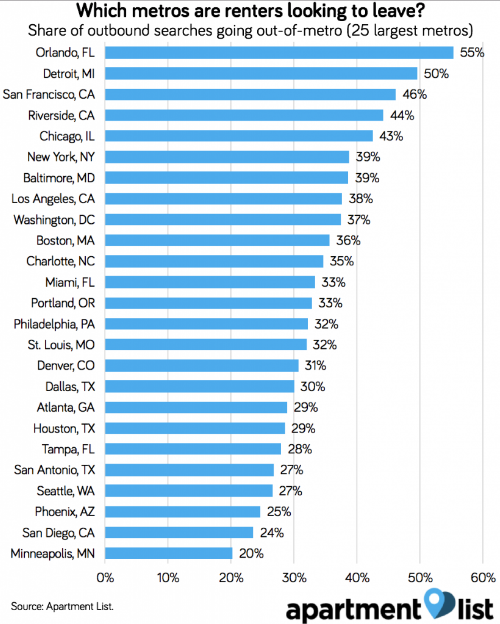 While the flow of renters from San Francisco to Denver may have been lower than we expected, the tech boom in Denver is definitely a real phenomenon.

“We see the Denver metro attracting renters from other major metro areas with highly educated workforces. The New York City, Chicago, and Washington D.C. metros are the first, second, and fourth most common locations for inbound searches to Denver, respectively making up 4.7 percent, 4.6 percent, and 3.0 percent of inbound searches coming from outside the metro,” Salviati writes. 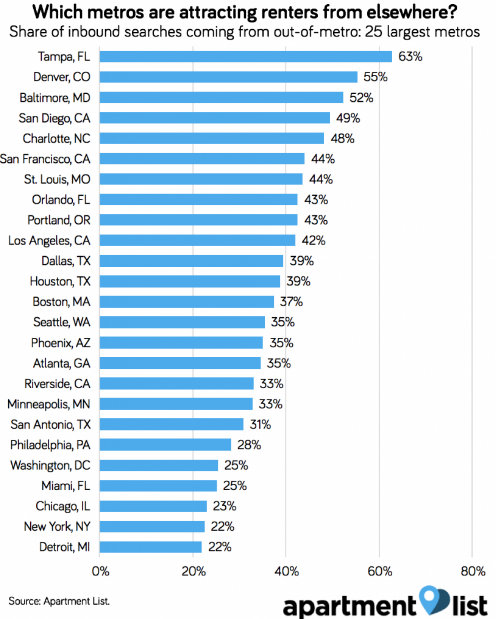 Phoenix is another example of a rapidly growing metro that has thus far retained its affordability, making it an attractive destination for those looking to leave more expensive areas on the West Coast.

But while Portland is attracting renters from throughout the West Coast and beyond, inbound searches to Phoenix are dominated by one metro: Los Angeles.

Users currently living in the L.A. metro comprise 18.9 percent of inbound searches coming to Phoenix from outside the metro.

Phoenix is the most popular outbound search location for those looking to leave the L.A. metro, ranking even higher than the Riverside metro which borders L.A. In contrast to the Bay Area residents who are moving further and further from the core metro and enduring increased commute times, it seems that L.A. residents feeling the price crunch would rather relocate to Phoenix than super-commute from Riverside.

“Knowing where Americans are moving to and from is key to understanding the evolution of our nation’s cities. Publicly available migration data from Census tracks these trends, but that data source captures moves that have already occurred and is released with a fairly lengthy time lag,” Salviati writes.

“Search data from platforms such as Apartment List can help supplement our understanding of migration patterns by serving as a leading indicator that shows where renters are looking to move before those moves have actually occurred.

“It is important to note that Apartment List users are not fully representative of the American population as a whole, and that rental listing searches do not always result in completed moves. That said, the trends we observe are nonetheless informative, and we hope that this data tool will serve as a valuable resource for those looking to understand the mobility patterns of America’s renters,” Salviati writes in the report.

Results are based on searches of Apartment List users occurring between January 1, 2018 and May 1, 2019. The company includes data from both registered and unregistered users. While registered users are uniquely identified, unregistered users who perform multiple searches may be counted multiple times. For users who search in multiple locations, the company considers the initial search location to be the primary one. Each user’s current place of residence is defined by the IP address from which the user is searching. All results are aggregated at the metro level, using Census definitions of metropolitan statistical areas.