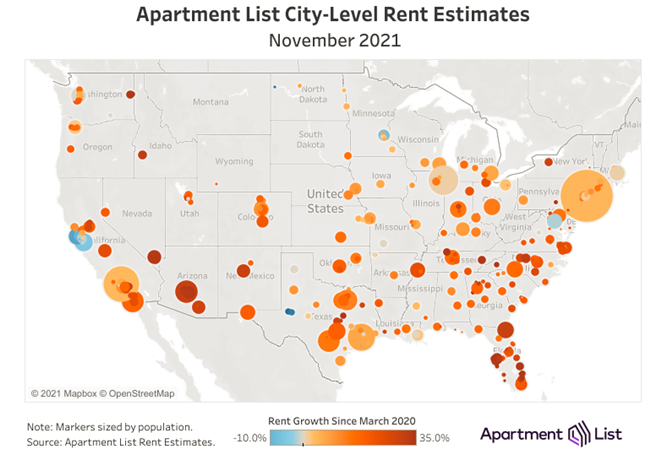 Rent growth is continuing to cool rapidly across many markets, according to the November report from Apartment List.

“While our national index was essentially flat, 53 of the nation’s 100 largest cities saw rents fall this month, indicating a widespread rental-market cooldown,” wrote housing economists Chris Salviati and Igor Popov in the report.

The pace of rent growth has been slowing for several months, but yearly total growth is still up and outpacing the pre-pandemic levels of rent.

Rents normally drop this time of year due to seasonality.

“Since January of this year, the national median rent has increased by a staggering 17.8 percent. To put that in context, rent growth from January to November averaged just 2.6 percent in the pre-pandemic years from 2017-2019,” the report says.

“The national median rent is $1,312 this month, which is $117 greater than where we project it would be if rent growth over the past year and a half had been in line with the growth rates we saw in 2018 and 2019,” the report says. 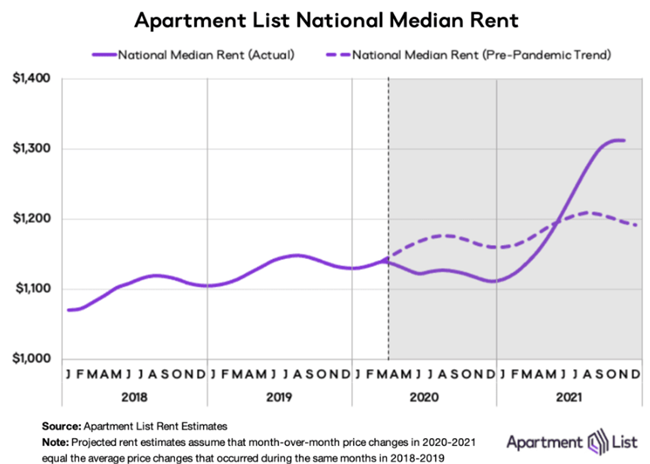 Rents grew by 0.1 percent in November, the fourth straight month that growth has slowed after peaking at 2.7 percent in July.

“This represents the smallest month-over-month growth rate that we’ve recorded in 2021,” the report says.

A slowdown in rent growth during the fall and winter is typical, but this year “the seasonal slowdown is capping a year that has been characterized by unprecedented price increases.”

Rents fell In November in 53 of 100 largest cities

While cities saw strong rent growth from March through September this year, 53 of these cities actually saw rents fall in November, the most since the previous November, when rents fell in 62 of the 100 largest cities.

The Apartment List report says among the cities where prices have started their winter cooldown, many are expensive coastal markets that saw steep rent drops in 2020 and fast rent rebounds in 2021. In particular, rents fell by 2.7 percent this month in San Francisco, the city’s second straight monthly decline and the fourth largest decline in the nation.

After bottoming out at 3.8 percent in August, “Our vacancy index has ticked up slightly for three consecutive months and now stands at 4.2 percent.

“Although the recent increase has been modest and gradual, it represents an important inflection point, signaling that tightness in the rental market is finally beginning to ease.

“If our vacancy rate continues to increase in the coming months, it’s likely that rent growth will also continue to cool,” the report says.