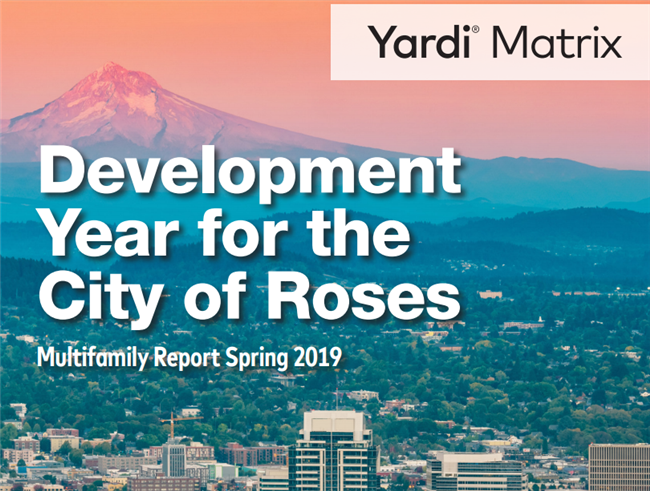 Portland multifamily rent growth has cooled due to more than 5,000 units coming online in 2018 with rents increasing only 1.9% year-over-year through February, below the 3.6% national average, according to the spring report from Yardi Matrix.

However, the outlook is good.

“Backed by solid job growth and in-migration boosted by a healthy quality of living, Portland’s multifamily market continues to be strong,” the report says.

“Oregon has attracted national attention due to its enaction of statewide rent-control limits,” the report says. “The law limits rent increases to 7% plus inflation and capital expenses and applies to properties older than 15 years. Although the immediate impact might be slight, the concern is that it will lead to tighter limits down the road,” the report says.

“The metro added 27,500 positions in 2018, a 2.4% year-over-year employment growth rate. The construction boom taking place in the metro is supported by the office sector, which has more than 2.4 million square feet of space under construction,” the Yardi Matrix report says.

“With more than 9,320 units underway and some 6,900 units expected to be delivered this year, there are major concerns about oversupply, but a strong occupancy rate is indicating that there is a rapid absorption of new deliveries and demand for housing outpaces supply. The high occupancy rate and steady rent growth are drawing investors to the metro.

Rents in Portland have decelerated in recent months, according to the report, which shows:

Portland’s multifamily pipeline has been robust in recent years, and that is expected to continue, the report says: