While Oregon has passed the first in the nation rent control measure, it is good to remember that most economists and many other professionals have warned it is bad housing policy.

A  study by Stanford University professors of rent control in San Francisco concludes that it does more harm than good and can cause housing shortages that reduce the number of low-income people who can live in a city.

Economists Rebecca Diamond, Timothy McQuade and Franklin Qian did the study, “The Effects of Rent Control Expansion on Tenants, Landlords, and Inequality: Evidence from San Francisco.”

“Steadily rising housing rents in many of the U.S.’s large, productive cities has brought the issue of affordable housing to the forefront of the policy debate and reignited the discussion over expanding or enacting rent control provisions,” the report states.

The map created by the National Multifamily Housing Council (NMHC)  earlier this year below shows states with rent control, with preemptions that prevent rent control policies, without rent control or preemptions and states that have previously been listed as having preemptions, but no statute or case law could be found. The NMHC has urged lawmakers to reject price controls and pursue alternatives such as voucher-based rental assistance to better address critical affordable housing shortages. 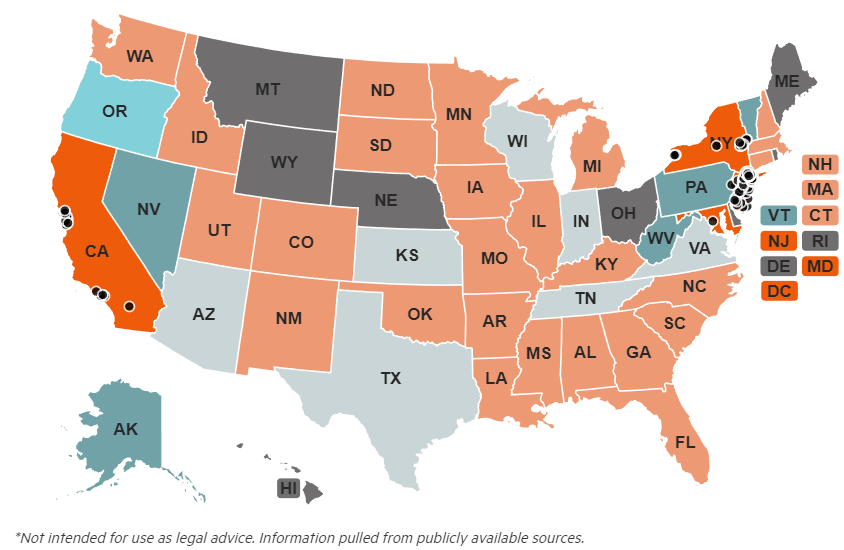 “Dillon’s Rule” requires states to explicitly grant powers to local governments. Although these states have not preempted rent control, they have not affirmatively granted power to cities to adopt rent regulations, and no cities in these states have rent-control policies. Ten states that do not have preemption laws and that don’t employ Dillon’s Rule do not have any cities with rent control. And even among the states with active
rent-control policies, some (such as California) impose strict limits on local laws, according to the Urban Land Institute.

“Rent control, the Econ 101 student learns, helps a few people, but overall does more harm than good,” writes Noah Smith in Bloomberg View. “According to the basic theory of supply and demand, rent control causes housing shortages that reduce the number of low-income people who can live in a city. Even worse, rent control will tend to raise demand for housing — and therefore, rents — in other areas,” Smith writes.

“It just dramatically limited the supply of rental housing. On top of that, it pushed landlords to supply owner-occupied housing and new housing—both of which are really the types of housing consumed by rich people,” Diamond said. “So we’re creating a policy that tells landlords, ‘It’s much more profitable to cater to high-income housing taste than low-income housing tastes.’”

The report states, “We find that rent control offered large benefits to impacted tenants during the 1995-2012 period, averaging between $2,300 and $6,600 per person each year, with aggregate benefits totaling over $214 million annually. Over the entire period, tenants received a discounted value of around $2.9 billion. We find that most of these benefits came from protection against rent increases and transfer payments from landlords. However, we find losses to all renters of $2.9 billion due to rent control’s effect on decreasing the rental housing and raising market rents. Further, 42% of these losses are born by future residents of San Francisco, making them worse off, while incumbent residents benefit on net.

“These results highlight that forcing landlords to provide insurance against rent increases leads to large losses to tenants,” the report states.

In the end, the strongest argument against controlling rents is that there are better ways to protect vulnerable renters.

“Diamond and her coauthors suggest an idea that I’ve also endorsed in the past — a citywide system of government social insurance for renters. “ Households that see their rents go up could be eligible for tax credits or welfare payments to offset rent hikes, and vouchers to help pay the cost of moving. The money for the system would come from taxes on landlords, which would effectively spread the cost among all renters and landowners instead of laying the burden on the vulnerable few,” writes Noah Smith in Bloomberg.

The High Cost of Rent Control

Rent Control: What Does the Research Tell Us about the Effectiveness of Local Action?

The Effects of Rent Control Expansion on Tenants, Landlords, and Inequality: Evidence from San Francisco

3 Big Problems with Rent Control And A Property Management Alternative

Noah Smith is a Bloomberg View columnist. He was an assistant professor of finance at Stony Brook University, and he blogs at Noahpinion.