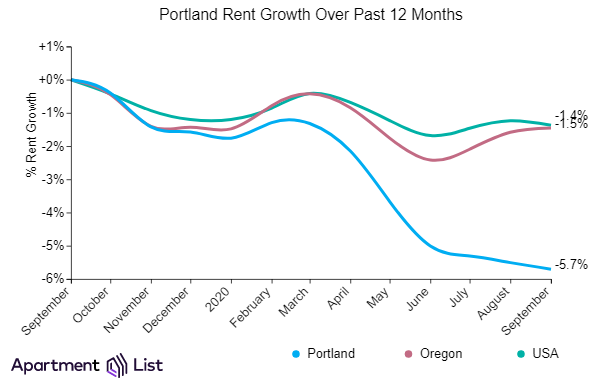 Portland rents continued to decline in September for the seventh straight month, dropping another 0.2 percent over the past month, according to Apartment List.

Rents are now down sharply by 5.7 percent in Portland year-over-year.

“These rent statistics represent our latest effort to design methods that address the most common issues that arise in rent-growth estimation,” said Chris Salviati, Housing Economist for Apartment List.

“In particular, this update reflects a concerted effort to capture transacted rents, as opposed to list rents, and we’ve found the difference to be meaningful during the pandemic.

“Our new numbers continue to paint the picture of a protracted national slowdown and uneven recovery: the national rent index is down 1.4 percent year-over-year, but there is tremendous regional variation beneath the surface. San Francisco and New York City continue to lead the nation in pandemic rent drops, while smaller markets like Boise and Colorado Springs are heating up,” Salviati said. 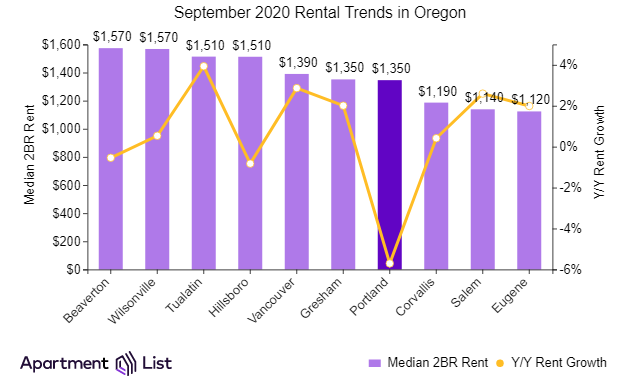 Rents have risen in seven of the largest 10 cities in the Portland metro for which Apartment List has data.

Tualatin, Vancouver, and Salem have all experienced year-over-year growth above the state average (3.9 percent, 2.9 percent, and 2.6 percent, respectively).

Oregon as a whole logged rent growth of -1.5 percent over the past year.

Looking throughout the metro, Beaverton is the most expensive of all Portland metro’s major cities, with a median two-bedroom rent of $1,574.

Hillsboro and Beaverton, where two-bedrooms go for $1,513 and $1,574, are the two other major cities in the metro besides Portland to see rents fall year-over-year (-0.8 percent and -0.5 percent). 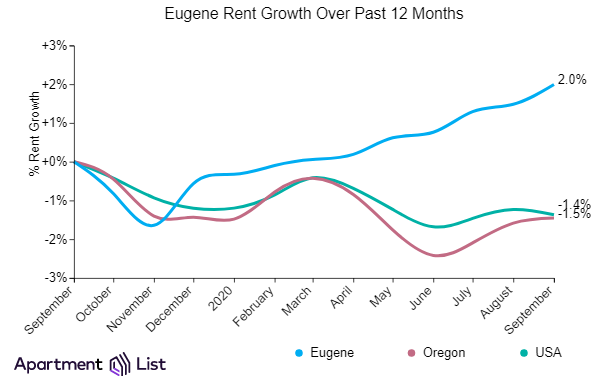 Eugene has seen a steady 10 straight months of rent increases.

September rents in Eugene have increased 0.5 percent over the past month, and have increased moderately by 2.0 percent in comparison to the same time last year.

Corvallis has also seen steady rent increases for the past four months. Corvallis rents were up 0.5 percent in September, but have been relatively flat at 0.4 percent in comparison to the same time last year.