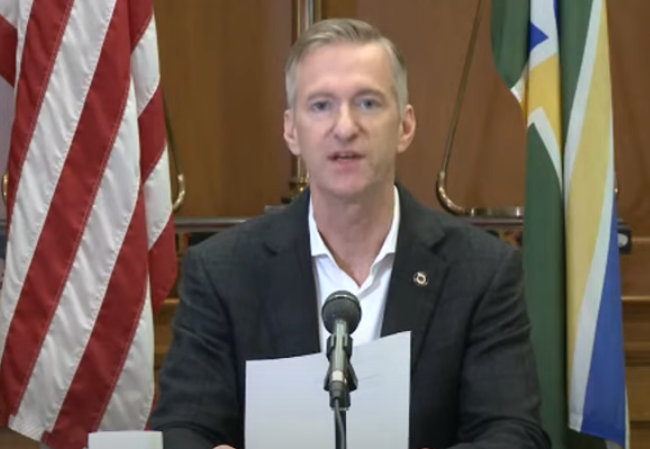 The Portland City Council has unanimously approved a measure effective immediately requiring landlords who raise rent by any amount to pay tenant relocation costs to move tenants who do not want to pay the rent increase.

“We are in the midst of a pandemic, and we need to do everything we can to keep Portlanders in their homes,” Mayor Ted Wheeler said in a release. “Simply put, this is a public-health issue. Stable housing is the foundation of health, and this relief measure will help protect Portland renters through the worst of this crisis.”

Previous code allowed rent increases of up to 10 percent without landlords being required to cover the moving costs of tenants. This temporary change in code will require relocation assistance for any rent increase between now and March 31, 2021, should a renter need to move out because they are unable to afford it.

Wheeler said the pandemic has exacerbated the housing-affordability problem in Portland and “now in a time of high unemployment and “when safe housing is critical to maintaining public health, we are continuing to hear about rents going up,” Wheeler said at a press conference earlier, “further challenging households that are already struggling to make their rent payments.”

“It’s likely that any rent increase would force renters to have to relocate while we’re in the middle of this pandemic. We need to do our part to protect renters from the tidal wave of evictions that we know is coming. We need to support renters who may need to relocate due to rent increases.

“We also need to make sure that our local property owners who rent their homes to Portlanders are not foreclosed upon because of any unnecessary added costs that make it impossible for them to pay back their loans,” Wheeler said.

With eviction moratoriums set to expire in Oregon at the end of September, Wheeler said the council has been trying to provide rent assistance to households, but “we know these resources will not be enough” to stem the tide of what he says could be a “tidal wave” of evictions. 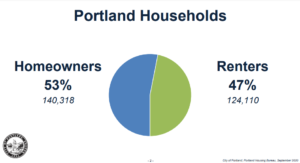 He said the Portland Housing Bureau demographic breakdown shows that 43 percent of renters in Portland are white, but 74 percent of Black, indigenous, and people of color are renters. He said renters are typically more vulnerable to cost-of-living and rent increases that can lead to displacement and issue.

Back rent is a problem

“It would take the average Black family in Portland almost six months to save up enough to repay just one month of back rent (at pre-COVID-19 levels). Even with an eviction moratorium in place and a six-month grace period to repay back rent, we were only postponing a much bigger problem without some bold action within the next four months,” Wheeler said.

He said one in four Portland renters were already paying more than half their monthly income toward rent prior to the pandemic. Since May, between 12 percent and 15 percent of Portland renters have been unable to make their monthly rent payments. Among “Class C” properties, which tend to be older buildings and located farther east, the rate of non-payment during the pandemic has been closer to 20 percent. Another reason he said tenant relocation payments are necessary. 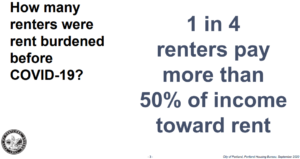 He said unpaid rent now totals between $22 million and $28 million, but at the current rate it will balloon to $120 to $125 million by the end of September next year.

In addition, he has directed the Portland Housing Bureau to allocate approximately $500,000 of existing funding towards housing stabilization and relief in East Portland.

In addition to tenant relocation,  “We need to protect renters and we also need to make sure that local property owners who rent their homes to Portlanders are not foreclosed on, because these circumstances make it impossible for them to pay back their loans,” the Portland mayor said. “These are temporary measures, but ensuring Portlanders stay in their homes may be the most important and effective action we can take right now.”

“I want to thank those building owners and landlords –  and I’ve met with many, and I’ve spoken to many – who have already reached arrangements with their tenants to do everything they can to support them and keep them in their housing and not increase their rent during this crisis.

“I want to applaud and acknowledge that that building owners and landlords have been valued partners in this conversation, but the work we can do right here and now, together in the community through shared sacrifice, is keep as many people in their homes as possible throughout the remainder of this public health emergency. Housing is directly tied to public health in the midst of a pandemic,” Wheeler said.