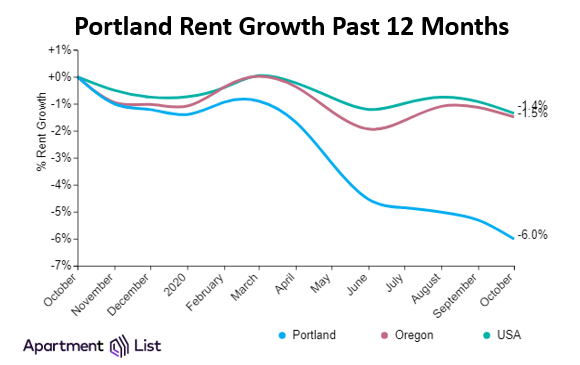 Portland rents declined again last month for the seventh straight month, while rent continues to increase in some cities in the metro area, according to the latest report from Apartment List.

Portland rents were down 0.7 percent over the past month, and have decreased sharply by 6.0 percent year-over-year.

“As the COVID-19 pandemic and its ensuing economic fallout continue to overwhelm renters across the country, our monthly rent estimates paint the picture of a protracted national slowdown and uneven recovery,” said Chris Salviati, housing economist at Apartment List.

“Our national rent index is down 1.4 percent year-over-year, but there is tremendous regional variation beneath the surface. San Francisco and New York City continue to lead the nation in pandemic rent drops, while smaller markets like Boise and Colorado Springs are heating up,” Salviati said.

While Portland rents declined, the metro was a different story. 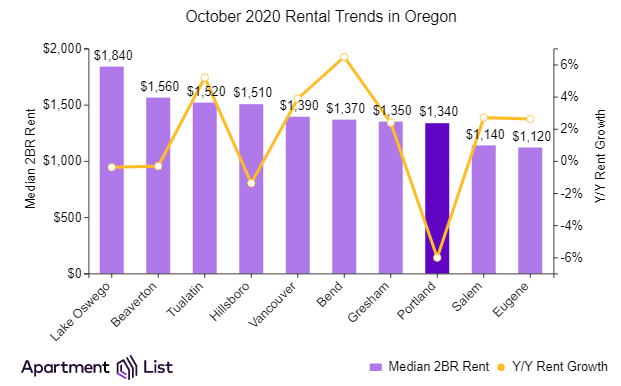 Rents are up in six of the 10 cities in the Portland metro for which Apartment List has data.

For example, Tualatin rents have increased 0.6 percent over the past month, and have increased significantly by 5.2 percent in comparison to the same time last year. Median rents in Tualatin are $1,404 for a one-bedroom apartment and $1,519 for a two-bedroom.

This is the fourth straight month that the city has seen rent increases.

And in Vancouver, rents have increased 0.4 percent over the past month, and have increased moderately by 3.9 percent year-over-year. Median rents in Vancouver are $1,180 for a one-bedroom apartment and $1,394 for a two-bedroom. This is the fifth straight month that the city has seen rent increases.

However, Beaverton and Lake Oswego, two of the more expensive rent locations in the metro, have both seen declines. Beaverton was down 0.7 percent in the past month and Lake Oswego down 0.6 percent.

Eugene rents have increased 0.2 percent over the past month, and are up moderately by 2.6 percent year-over-year, according to the most recent report from Apartment List.

This is the eleventh straight month that the city has seen rent increases.

Currently, median rents in Eugene are $843 for a one-bedroom apartment and $1,120 for a two-bedroom.

Salem rent trends were flat over the past month

While Salem rents remained flat over the past month they have increased moderately by 2.7 percent year-over-year.

Currently, median rents in Salem stand at $874 for a one-bedroom apartment and $1,138 for a two-bedroom.