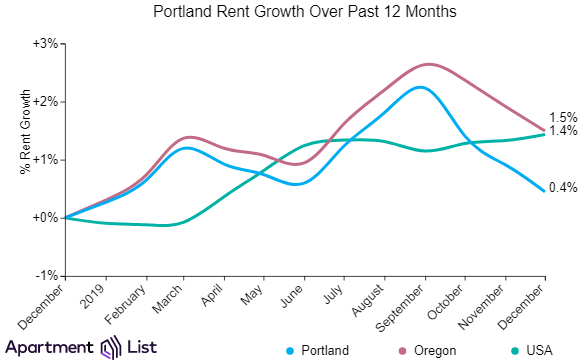 Portland rents continued their decline for the third month in a row after the last increase in September, according to the January report from Apartment List.

Portland rents have declined 0.5 percent over the past month, but have been relatively flat at 0.4 percent in comparison to the same time last year. Median rents now are $1,122 for a one-bedroom apartment and $1,324 for a two-bedroom in Portland.

Rents rising across the Portland metro 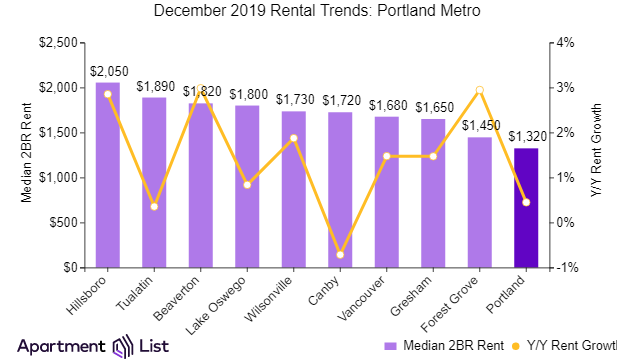 While rents have remained steady in the city of Portland throughout the past year, cities across the metro have seen a different trend. Rents have risen in nine of the largest 10 cities in the Portland metro for which Apartment List has data.

Portland rents more affordable than many other large cities nationwide

Rent growth in Portland has been relatively stable over the past year, while some other large cities have seen more substantial increases. 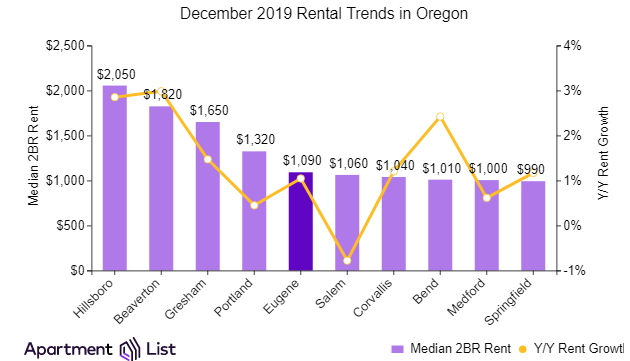 Eugene rents have declined 0.5 percent over the past month, but have increased slightly by 1.0 percent in comparison to the same time last year, according to the latest report from Apartment List.

This is the third straight month that the city has seen rent decreases after an increase in September. Eugene’s year-over-year rent growth lags the state average of 1.5 percent, as well as the national average of 1.4 percent.

Corvallis rents flat over the past month

Corvallis rents have remained flat over the past month, however, they are up slightly, by 1.2 percent year-over-year.

Median rents in Corvallis are $828 for a one-bedroom apartment and $1,039 for a two-bedroom.

Salem rents decline sharply over the past month

Salem rents have declined 0.7 percent over the past month, and have decreased moderately by 0.8 percent in comparison to the same time last year.

This is the third straight month that the city has seen rent decreases after an increase in September.