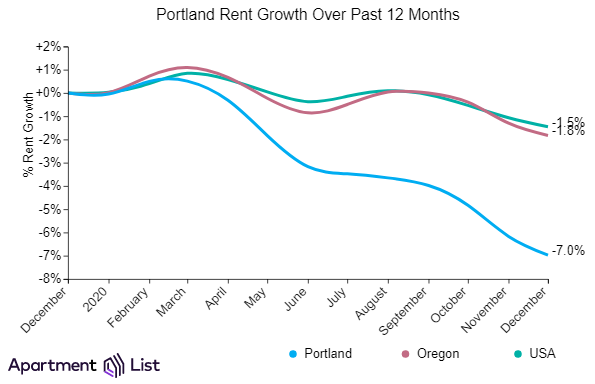 Portland rents have declined 0.9 percent over the past month, and have decreased sharply by 7.0 percent year-over-year, according to the latest report from Apartment List.

This is the ninth straight month the City of Portland has seen rent decreases. The last time any rents went up was back in March of 2020.

“As we enter the New Year, our national rent index has begun to stabilize after a wild 2020. Rents are down 0.4% month-over-month nationally, a seasonal dip consistent with what we’ve seen in prior years,” said Igor Popov, Chief Economist, Apartment List.

“That said, there has been significant regional variation in the impact of the COVID-19 pandemic; while our national rent index is down by a fairly modest 1.5 percent year-over-year, many markets are experiencing greater volatility. The urban cores of San Francisco, Seattle, Boston, and New York City continue to see rent prices fall rapidly, while many smaller markets and suburbs are actually getting more expensive,” Popov said.

While Portland is seeing continuing rent declines, cities in the rest of the metro are seeing the opposite trend.

Rents have risen in 7 of the largest 10 cities in the Portland metro for which Apartment List has data.. 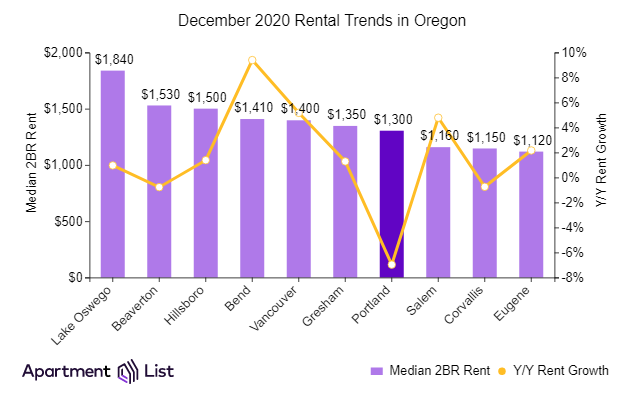 Why is this happening?

Rents in outlying suburbs are growing much faster than rents in core metropolitan areas, according to research from Apartment List.

There are a number of reasons rent trends in principal cities do not mirror those of nearby suburbs.

The pandemic’s effects on everyday life have certainly been more pronounced in cities than suburbs. Shelter-in-place requirements and business restrictions have ground to a halt many of the events and amenities that attract people to cities in the first place: live entertainment, bars and restaurants, public festivals, and the like.

Many renters today are questioning whether it still makes sense to pay a premium for city living. As a result, migration plays a big factor in the urban and suburban rent divide, according to Apartment List research.

Portland Rents Continue On Downward Track For Another Month