The Oregon Supreme Court has granted review of the Owen decision, which relates to landlords’ appeal to invalidate the Portland Relocation Ordinance, according to attorney John DiLorenzo.

Portland landlords had appealed to the Oregon Supreme Court after losing the appeal of the Portland Relocation Ordinance in the Oregon Court of Appeals.

“They are not limiting argument to any particular issue, so I assume it means each of the arguments we made in the petition will be in play in the Supreme Court,” DiLorenzo said.

“Winning on any of those arguments would result in invalidating the Relocation Ordinance and possibly other city ordinances,” he said.

The landlords argue the city ordinance is in conflict with state laws that ban rent control. On March 7, 2018, the Portland City Council made the ordinance permanent and extended its application to landlords who own as few as one rental unit.

The background on the case

“The legislature has determined that rent control is a matter of statewide concern and proclaimed that no local government may enact any ordinance that either ‘controls the rent that may be charged for the rental of any dwelling unit,’ ORS 91.225(2), or that is inconsistent with that prohibition, ORS 91.225(7).,” DiLorenzo said when the trial court’s decision was appealed to the Court of Appeals.

“Notwithstanding the legislature’s unambiguously expressed intent to preempt local rent-control legislation, the city enacted the ordinance, which requires landlords to pay thousands of dollars to tenants upon the tenants’ demand when a landlord gives notice of a rent increase of 10 percent or more in a 12-month period—meaning the ordinance penalizes rent increases that cumulatively total 10 percent or more in any rolling 12-month period.”

DiLorenzo explained why the ordinance is in violation of state law. 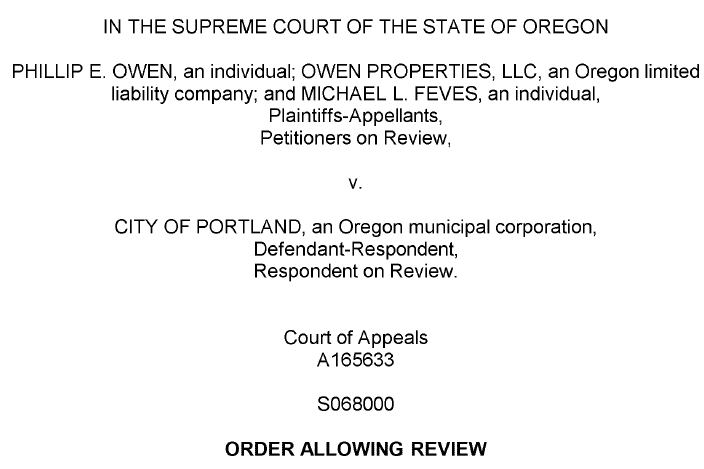