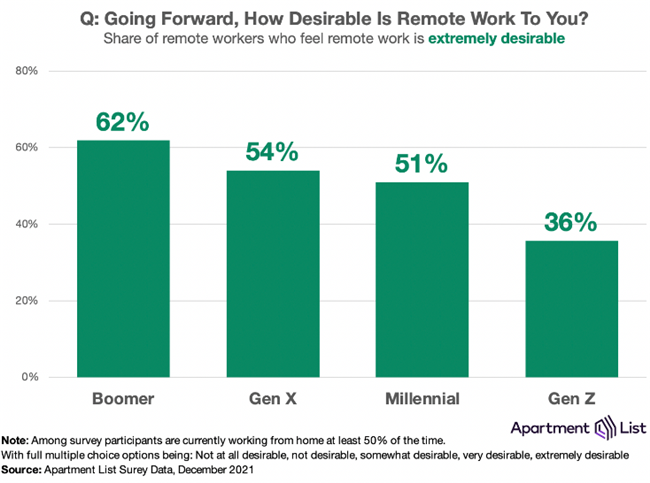 More than 40 percent of workers are still working from home, but new survey data from Apartment List shows that not everyone loves remote work.

“In our latest report, Not Everyone Loves the Remote Work Revolution, we find that remote work is common across workers of all ages, but the youngest generation is least enthused about doing it long-term.

“It has its obvious pros and cons, most notably a healthier work/life balance coming at the expense of feeling less connected to co-workers,” according to one study. But not everyone weighs these competing effects in the same way at different stages of their careers.

“Generation Z is the only group in which a majority of workers feel differently; among this youngest batch of remote workers who were ages 25 or younger at the time of our survey, 36 percent said remote work is “extremely” desirable, 27 percent described it as “very” desirable, 28 percent as “somewhat” desirable, and the remaining 9 percent as “not so” or “not at all” desirable. 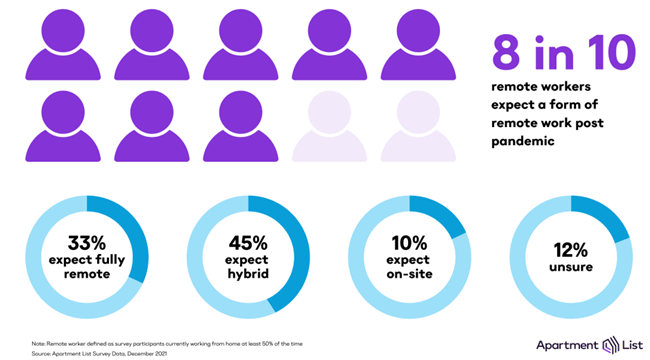 The remote-work revolution and its impact on employers “has implications for local housing markets, as some large employers announce plans to roll back work-from-home policies or adopt hybrid arrangements,” said Chris Salviati, Housing Economist at Apartment List.

Apartment List writes in the report that the growing popularity of hybrid remote work is beginning to repair the threads that connect homes and jobs. However there is a difference between hybrid work and true full-time remote work.

“Hybrid work is significantly more restrictive than full-time remote work when it comes to workers’ abilities to relocate,” the report says. True remote workers can work from anywhere with an internet connection, while hybrid workers “are limited to a fairly narrow radius around their job site. If remote workers must endure commutes only a couple times per week, they could expand the commuting zones of major metropolitan areas, but long-distance cross-metro moves will generally not be feasible. Throughout 2021, as hybrid arrangements were becoming more common, we saw rent prices picking back up everywhere, in urban and suburban markets alike.”