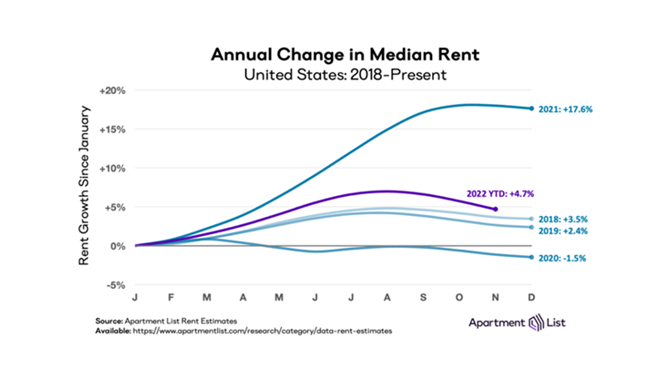 The national rents index fell by 1 percent over the course of November, marking the third straight month-over-month decline, and the largest single month dip in the history of the Apartment List index, going back to 2017, according to the December report from Apartment List.

The report says rents are likely to continue to dip in the coming winter months as well.

“The timing of the recent cooldown in the rental market is consistent with the typical seasonal trend, but its magnitude has been notably sharper than what we’ve seen in the past, suggesting that the recent swing to falling rents is reflective of a broader shift in market conditions beyond seasonality alone,” the research team writes in the report.

Year-over-year rent growth has slowed considerably since the first of the year and is close to matching pre-pandemic levels. 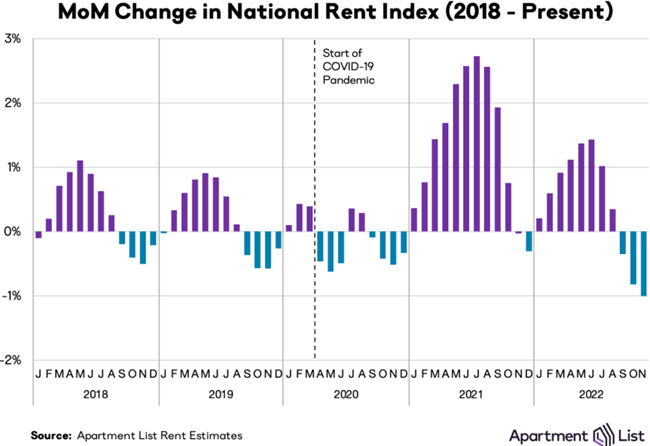 Rents decreased in 93 of the nation’s 100 largest cities that Apartment List measured.

Among large metros nationwide, Seattle saw the sharpest decline in November, with prices down by 2.6 percent month-over-month.

“And over a longer horizon, we are continuing to see an ongoing cooldown in many of the recently booming Sun Belt markets. Las Vegas, Phoenix, Jacksonville (Fla.), and Riverside (Calif.) have all seen rent growth of 30 percent or more since March 2020, but none of these metros has seen rents increase by more than 1 percent over the past twelve months,” the report says.

“This year’s dip has so far been sharper than what we typically see. Prices have now fallen by a total of 2.2 percent since August, which is the sharpest three-month decline in the history of our index.

“The recent dip suggests that we may be entering a new phase of the rental-market rollercoaster, with changing economic conditions now driving a cooldown rental demand just as supply constraints are easing. It’s likely that rents will decline further in the months ahead, as rental market activity continues to slow during the winter months,” the research team writes.

The report says the pace at which the vacancy rate is easing has been picking up a bit of steam in recent months, as rent growth has turned negative. 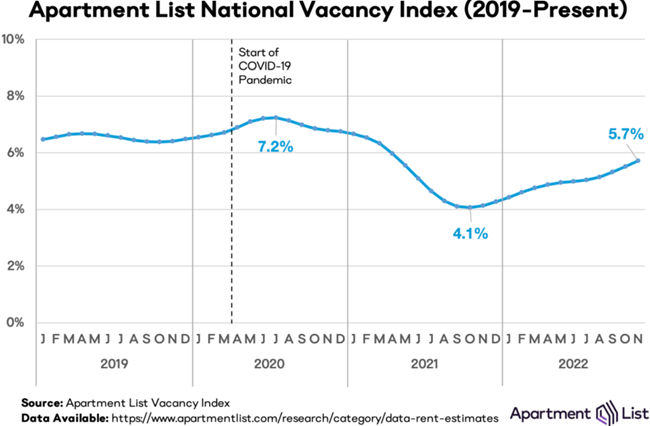 The report summarizes that the recent rent declines are “still quite modest in comparison to the skyrocketing growth of last year, and the national median rent is still 23 percent higher than it was in January 2021.”